It was watched by people from across the globe 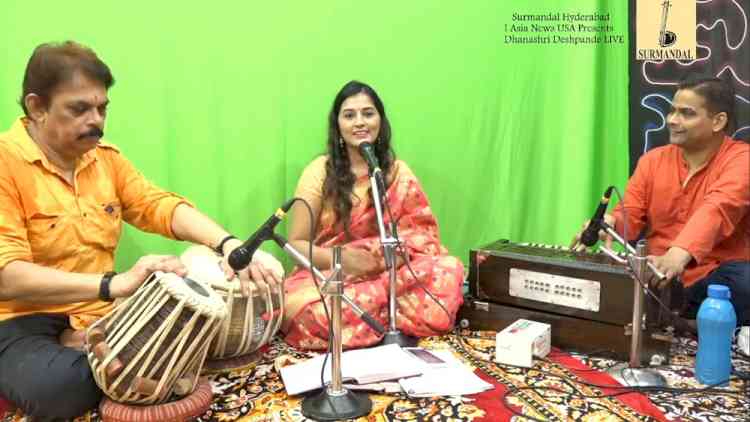 Hyderabad: Surmandal, a group of culturally inclined people and music lovers of Hyderabad organised its first virtual live a Classical and Light Music Concert on Facebook by Dhanashri Deshpande on Sunday morning. It was Organisation in association with iAsiaNews, USA.


It was watched by people from across the globe.


According to Mr Mohan Hemmadi. Founder of Surmandal, the concert was organised as part of its Golden Jubilee celebrations.


Speaking at the virtual inaugural, Mr Hemmadi wished for the speedy recovery of the legend singer SP Balasubrahmanyam, who is battling in a hospital in Chennai.


Dhanashri Deshpande started performance with a prayer in rag Ahir Bhairav, a Hindustani Classical Raga, a mixture of Bhairav and the ancient rare raga Ahir for the good health of noted singer SP Balasubrahmanyam. Then she continued her performance with geeth based on the same raga.


Just recently she performed in the Netherlands along with Dr Prakash Amte & Mandakini Amte. She also performed in Russia along with Mandhar Udhas some time back. She sings old and new Film songs, Semi-Classical songs, Classical based songs, Bhajans, Sufi and many more genres.


Surmandal was formed in the way back in 1969 and since then it has introduced to this city many luminaries and legends in the cultural space. Mohan Hemmadi through Surmandal has been tirelessly organising many cultural festivals in the city. He brought many legends to this city to perform. Surmandal which is now celebrating Golden Jubilee this year has become synonymous to cultural festivals especially Indian Cultural Festivals.

Issue of Central University emerges up in Dharamshala MC...

Biggest ever vaccination drive in India to be held on 6th...