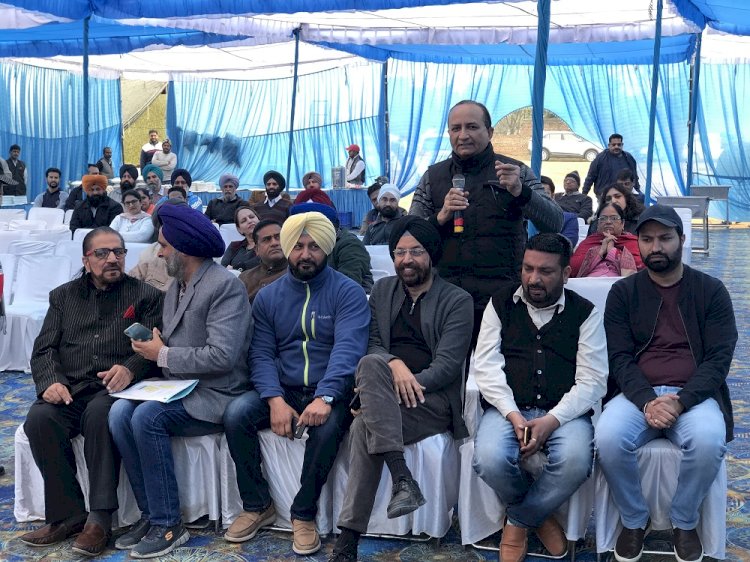 Ludhiana: Mr Parminder Singh Gill, Chief Administrator, Greater Ludhiana Area Development Authority (GLADA) today informed that the successful allottees of “Glada Estate” would get possession of their plots by March 2020 and soon after they can start the construction of their houses. He also informed that the draw of the remaining plots would also be held shortly, besides the E-auction of the shops located in this housing urban estate.
It is pertinent to mention that GLADA is developing an affordable Housing Urban Estate in an area of about 9.57 acres at Village Daad, Distt Ludhiana under the name-GLADA ESTATE. The site is situated in the prime location of the City flanked by posh areas namely Shaheed Bhagat Singh Nagar (Pakhowal Road), Bhai Randhir Singh Nagar and Rajguru Nagar. It is situated on 64 feet wide Sua Road (proposed to be widened to 80 feet as per the provisions of the Master Plan, Ludhiana) having its main access from the backside of Hotel Keys, which is situated on 200 feet wide Southern Bye Pass. There are many renowned Schools, educational and medical institutions, Shopping Malls, Club and stadium within a radius of 2 kms.
Mr. Parminder Singh Gill, IAS, Chief Administrator, GLADA today organised a function at the site, where all the successful allottees were invited. The GLADA officials not only interacted with them, but even answered several of their queries.
Eminent singer Mr K Deep, who is also one of the allottees, thanked the GLADA officials for starting work on this project on war footing and said that he would be constructing a house here.
Mr Parminder Singh Gill further stated that the striking feature of the scheme is that there are many debuts in it viz, it has been for the first time in the history of Punjab, that an affordable housing Scheme under the provisions of Land Owners Become Partners in Development Policy of the Punjab Government has been launched. Besides, other other debuts in the scheme are that it is for the first time that the scheme shall have 100% underground electricity wiring and provision of 24 hours water supply in it”. "The developmental works have already been started at the site,” he further added.
During his visit to the site today, Mr Gill informed that other salient features of the site are that for the first time 100% under ground electric wiring is being provided, around quarter of plots on 60 feet roads, walled and Gated colony (Highly secured), underground Sewerage and separate STP provided, commercial Market (SCOs) situated on 80 feet wide Sua Road having corridor, footpath and adequate parking, subsidised plots available for Economically Weaker Section (EWS), plush green Parks and Open spaces providing Clean and Green environment to the residents, 24 hours electricity and water supply available, besides several others.

With arrest of two, police solve blind murder case of a...