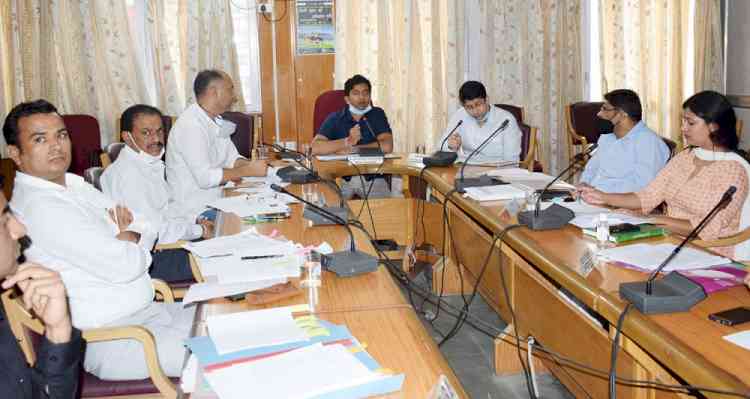 Dharamshala: Deputy Commissioner Rakesh Prajapati has directed the officials of the Rural Development Department to make a special focus on the overall MGNREGA at the panchayat level so that more people, who become unemployed due to the lockdown can be benefited. In this regard, the Deputy Commissioner said that a report should also be sent regularly about the implementation of the overall MNREGA to him.
Prajapati said, “Under MNREGA individual activities will be encouraged to strengthen farming, horticulture, animal husbandry and fisheries areas. any unemployed rural person who is willing to work under MGNREGA on his personal land can also be allowed to work under MNREGA, even if the work is not included in the list of works approved by the Gram Sabha and the related section. Post-approval of these works by the Development Officer should be ensured as per the guidelines of MNREGA.”
The Deputy Commissioner said that a target has been set to provide employment to about five thousand people in the rural areas within the next fifteen days under the overall MNREGA.  He said, “In each development block, initially the  land should be selected on priority for the construction of at least one park under the Panchwati program and according to the guidelines of the government, effective steps should be taken to construct the Panchwati Park . Along with this, construction works of Lok Bhavans should be expedited.”
Deputy Commissioner said that effective steps should be taken to initiate development works which were stopped during lockdown at the panchayat level, regular review meetings should also be conducted  at the development block level. Appropriate steps should also be taken to meet the targets set under the housing schemes, with special attention to quality in construction works. Block Development Officers should also ensure regular inspection of development works at their level. He said that under the year 2013-14 to 2018-19, a report should be sent for the development works for which funds have been sanctioned and the works have not started yet, so that this amount can be spent on other development works.
BDO of all development blocks including ADC Raghav Sharma, Project Officer DRDA were present on the occasion.