The event was attended by the senior faculty members 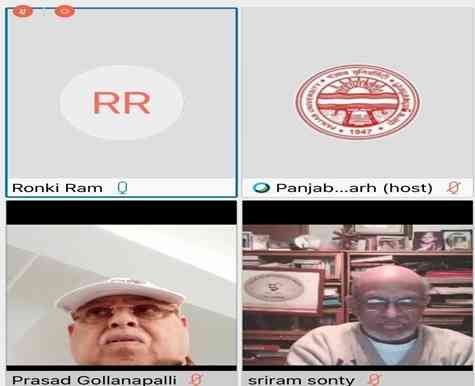 While welcoming the dignitaries in the Webinar, Dr. Manish Sharma, Chairperson of the Department payed his tributes to the Martyrs and asked everyone to observe 2 minutes silence at 11am.

After paying the homage to all the Martyrs, Professor Ronki Ram in his presidential remarks asked everyone to follow the path of Nonviolence as to resolve the conflicts in the society,only Gandhian ideology is the best solution for the same, whether they are social, religious, economic or any other issues. His most contribution to this world is how to look at the conflict and to find the solution for the parties. His concept was not focussed on the win of the one party but for both the parties and with the concept of democratic way the real meaning of resolution of the conflict situation can be achieved and the welfare of the masses can be seen. In his online lecture on "गांधी जी को दिए गए मानपत्र"  Professor Mehboob Desai narrated various examples from one of his latest research work which was high appreciated by many that whenever Gandhi ji was awarded with different citations and narrations which were not only different in nature but the wordings of the same were as such that they suited his personality. These citations/ honorary recitations were offered to him where ever he had gone which included the South African phase also. Apart from the citations some amount was also attached with the same but Gandhi ji never taken those amounts and always handed over the same in the national account of the Congress party for the welfare of the masses. And there were occasions where Gandhi ji mentioned that when we are awarding someone with the kind of citations to any one then they should have some guidelines in the form that they should be handwritten, on hand made paper with natural colours and it should be related with the kind of situation and the hard work of the person who had contributed to the society. And in the end he also asked the audience that if the Gandhian thoughts are added while awarding the Citations then it would be very beneficial to all.

The event was attended by the senior faculty members of the other departments including Professor Monica, Prof. Navjot  and also the research scholars and Master students. Dr. Ashu Pasricha faculty member of the department proposed the vote of thanks to all.

Ashwani Kumar awarded for his continuous 27 years services to PU