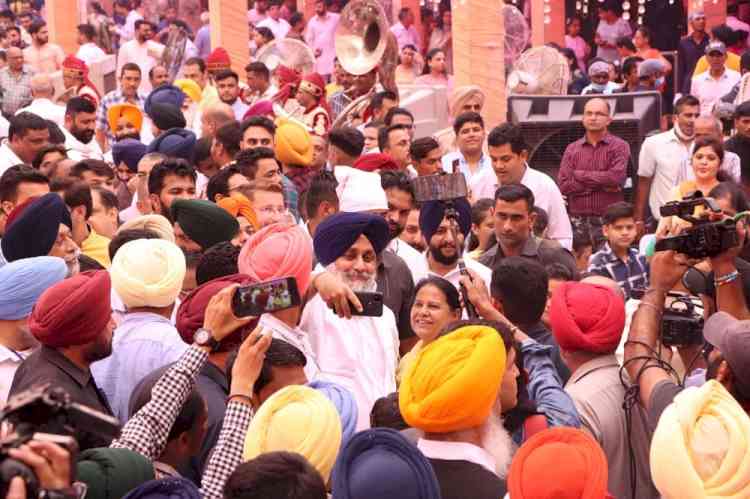 Says all decisions aimed at enriching Congressmen or their near and dear ones will be reviewed
Ludhiana, September 26, 2021: Shiromani Akali Dal (SAD) President Sukhbir Singh Badal today said all Congress ministers who had indulged in corruption would be taken to task and that the next SAD led government would establish a special Commission to probe their misdeeds.
The SAD president was on a visit to the city here during the course of which he crisis crossed various constituencies and visited the Jain School at the Daresi Ground as well as the Shanglawala Shivala Mandir and the Gyan Sthal Mandir in the central constituency. He also visited various localities in the west constituency besides attending an interaction with industrialists and doctors arranged by Neeraj Satija in Model Town besides meeting residents of Atam Nagar.
Speaking to newsmen here, Sukhbir Badal said the Congress party should not think that ousting a few corrupt ministers would wash away their sins or had made the other members of the cabinet swanky clean. “It is a fact that the entire Congress party is stained in corruption. Congress ministers have engineered scams worth thousands of crores. I assure Punjabis that all these scams will be probed thoroughly by a special Commission and that those guilty of looting Punjabis and the State will be brought to book”.
Badal also announced that the next SAD led government would review all decisions taken during the last three months of Congress rule. He said all the decisions aimed at enriching Congressmen or their near and dear ones would be struck off.
Answering a query, the SAD President said the SAD had welcomed the appointment of Charanjit Channi to the top job in the State. “However it is painful to watch the new chief minister being overshadowed by PCC President Navjot Sidhu as well as Deputy CM Sukhjinder Randhawa. It is also unfortunate that Channi does not have any say in governance. All decisions – be it choosing the cabinet or the chief secretary, state police chief and the Advocate General are being taken by others. Files are only put before Channi for his signatures. This is not befitting the dignity of the high office. The Congress party should respect the office of chief minister by allowing Channi take his own decisions as per the mandate given to him and not treat him as a rubber stamp”.
Badal also highlighted how many corrupt ministers were still an integral part of the Congress cabinet. He highlighted how the party was committed to putting Ludhiana back on track again. “The city, which witnessed rapid growth during earlier SAD led government, has witnessed a complete slow down during Congress rule with all infrastructure works coming to a halt. We promise to take Ludhiana, which is truly the heart of the State, to the next level by developing it as a centre for industry as well as a truly high tech city”.
Also vsited Jama Masjid, Fieldganj, Ludhiana, to share the grief of Shahi Imam Habib Ur Rehman Saani's demise.
Leaders who accompanied the SAD President during the day included Anil Joshi, Maheshinder Singh Grewal, Sharanjit Singh Dhillon, Hira Singh Gabria, Manpreet Ayali, Prithpal Singh Pali, Harish Rai Dhanda Kamal Chatly and Vijay Danav.

Statement on extended period for putting farm laws on hold...