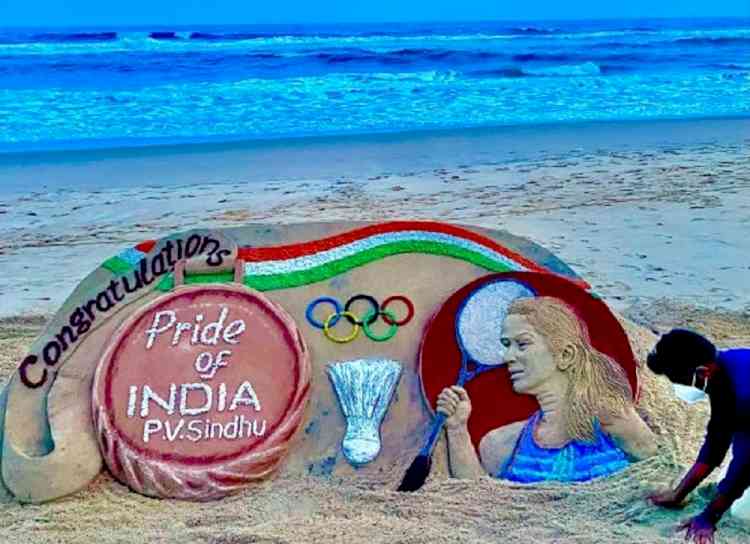 Bhubaneswar: Ace Indian badminton player PV Sindhu has appreciated the sand art created by renowned artist Sudarsan Pattnaik on the Puri beach after the Hyderabadi clinched a bronze medal at the Tokyo Olympics to add to her silver at the 2016 Rio Olympic Games.

Soon after Sindhu defeated China's He Bingjiao 21-13, 21-15 at the Musashino Forest Sports Plaza to add a second medal to India's tally at the Games, Pattnaik posted a picture of his art on social media with the message, "Congratulates @Pvsindhu1 ji for winning the #Bronze Medal in #Tokyo2020 #PrideofIndia #PVSindhu. My SandArt at Puri Beach in Odisha."

The reigning world champion is only the second Indian after wrestler Sushil Kumar and India's first woman to win two Olympic medals.

Sudarsan has also created a sand art to appreciate the Indian women's hockey team's entry into the Olympics semifinal for the first time.

Amul, known for their catchy advertisements, too shared an image of Sindhu standing next to India's most loved ad icons, the Amul girl, and wrote, "PV Windhuï¿½ Amul for brains and bronze!"

The art of eating right during a pandemic