Say they are unable to pay salaries, taxes, electricity bills as their business were shut down 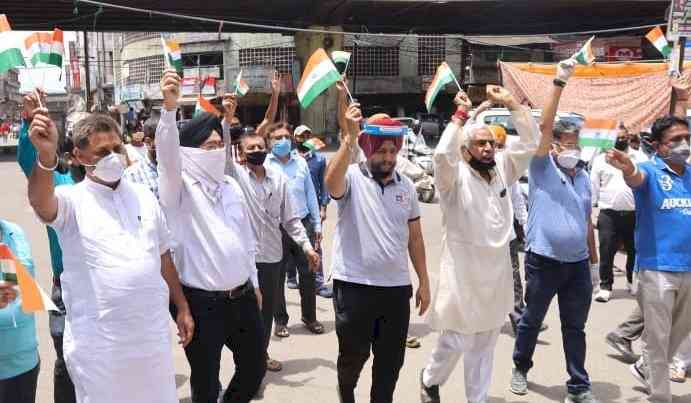 The shopkeepers of Ludhiana city hold Tirana March and demanded the government to open all shops.

Ludhiana: The shopkeepers of Ludhiana city hold Tirana March and demanded the government to open all shops. The shopkeepers said that they are unable to pay salaries, taxes, electricity bills as their business were shut down.

Gurdeep Singh Gosha and Sunil Mehra of Business Bachao Morcha said that the government has allowd factories to open but factories can’t run until the shops were opened for sale. The government should allow all shops with safety conditions to save the small shopkeepers.

They said that it has become difficult for shopkeepers to pay salaries to employees, electricity bills and other taxes during the lockdown.

Kaka Sood, Arwinder Singh Makkar, Sanjeev Chaudary, Harkesh Mittal, Goldy Arneja said that due to prolonged lockdown, our staff is also planning to migrate to their native places. “We were supporting them morally and financially till now”, they said, adding, “But if our retail outlets are not opened with immediate effect, our staff is also willing to leave soon.”
In the absence of already skilled staff, opening of shops will become a serious problem, they said, adding being small shopkeepers, it will become extremely difficult to look for new labour.