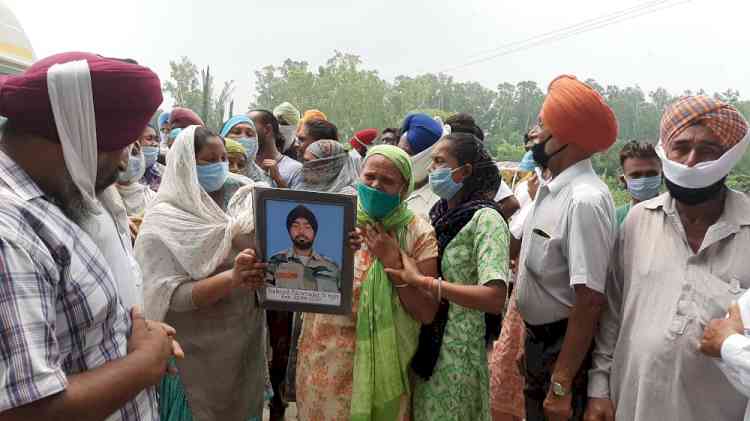 Doraha (Ludhiana):  The body of Sepoy Palwinder Singh, who was killed in a road accident at Kargil, was cremated with military honours at village Rampur near Doraha today. On behalf of the Chief Minister Punjab, Food, Civil Supplies and Consumer Affairs Minister Mr Bharat Bhushan Ashu paid respect to Palwinder Singh. He was also accompanied by MLA Samrala Mr Amrik Singh Dhillon, MLA Payal Mr Lakhbir Singh Lakha, SDM Miss Geetika Singh, his family members, villagers and district administration officials.
Palwinder Singh basically belonged to village Dhindsa near Samrala. When he was going somewhere along with his officer in a Maruti Gypsy on June 22, it met with an accident and fell in the river. His elder brother Jagpreet Singh informed that Palwinder was recruited into the Indian Army in the year 2010 and his father had also served the Indian Army for 24 years. Jagpreet Singh urged Chief Minister Capt Amarinder Singh to come to the aid of the family and provide job to his another younger brother who is a graduate.
Cabinet Minister Mr Bharat Bhushan Ashu, who attended the cremation on behalf of the Chief Minister, assured the family members that the Punjab government would support them in every way.