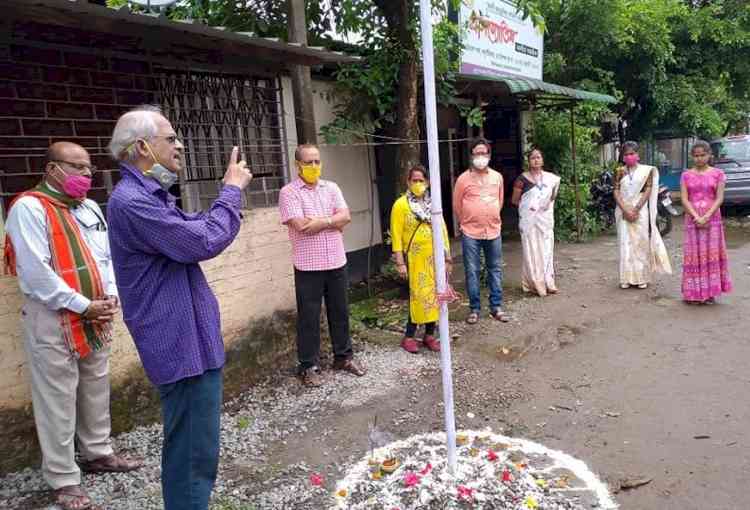 Guwahati: Sangbadik Sangha Purbanchal (SSP) today paid
rich tributes to the martyrs of India’s freedom movement on the
occasion of 74th Independence Day at the premises of Pragjyotish
newspaper in the city’s Bamunimaidam locality, following Covid-19
protocols with senior journalist Rupam Barua unfurling the national
Tri-colour.
Expressing gratitude to the martyrs who sacrificed immensely to make
India a sovereign nation, Barua urged citizens to set aside 15 August
and 26 January every year to pay them homage. Protests and
demonstrations should be avoided on these two days so that all Indians
can stand together as one, he asserted, pointing out that certain
misguided quarters have no compunctions in airing their grievances
even on such sacred occasions  although they are very conscious about
their constitutional rights.
“India could adopt a constitution only after being freed of foreign
yoke, thanks to the martyrs. It is the moral responsibility of every
generation to recall their sacrifices and express gratitude as proud
Indians,” he said.
Earlier, at least eight banned armed outfits issued media statements
calling to boycott  the  I-Day celebrations this year across the
Northeast region. Calling it a ‘colonial Indian I-Day’,  National
Socialist Council of Nagalim and United Liberation Front of Assam
(Independent) asked the people not to take part in I-Day related
programs. They called for a total shutdown on 15 August  in the
region, terming it the Western part of South-East Asia (WESEA). In a
separate statement, six other insurgent outfits namely People’s
Democratic Council of Karbi Longri, Kamatapur Liberation Organization,
Hynniewtrep National Council, Kanglei Yawol Kanna Lup, Kangleipak
Communist Party and National Liberation Front of Twipra called upon
the  people of Northeastern States to ‘take responsibility to make the
I-Day ban a grand success’.
SSP convener Nava Thakuria and Pragjyotish editor Khagen Saikia
welcomed participants to the flag-hoisting ceremony, which was graced
by journalists Satyadhar Matak, Raman Bora, Rubie Das, Girindra Kr
Karjee, Sankar Gohain, Iswar Mahanta, Chandra Kr Barua, Kaushik Kr
Deka, Sewali Kalita along with Pramod Kalita, Utpal Dutta, Jagadindra
Raychoudhury, Basanta Barthakur, Bharati Kalita, Kishor Sarma, Ila
Deka, Tina and Krishna among others.

Ivyians gear up for virtual celebration, this Independence Day

Gaggal airport expansion will be executed only after taking...