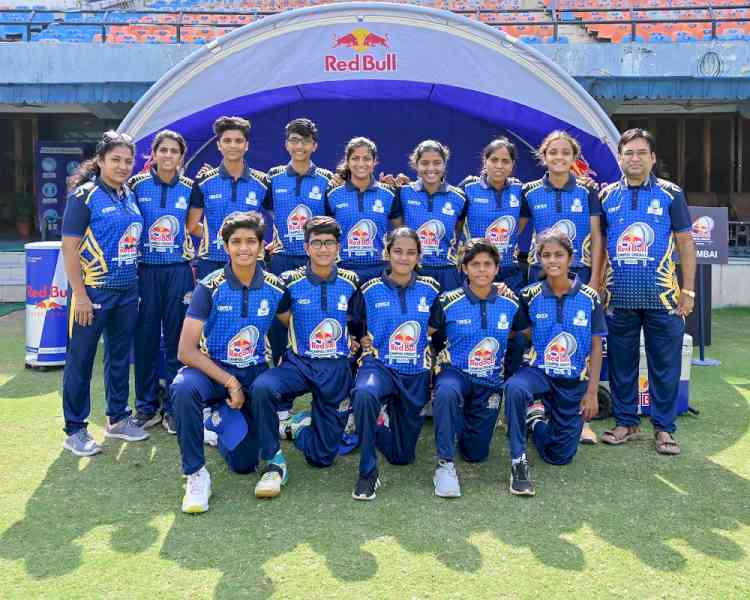 Mohali, October 22, 2021: Today, PCA Stadium in Mohali witnessed the first ever women’s edition of Red Bull Campus Cricket National Finals between Delhi’s Gargi College and Rizvi College from Mumbai. After a quality contest between bat & ball, it was Rizvi College from Mumbai that created history by beating Gargi College, Delhi by 3 wickets to be crowned the first ever women’s champions of Red Bull Campus Cricket.
Colleges from four cities – Mumbai, Delhi, Chennai, and Ranchi – participated in the competition. The aim of the tournament is to boost the increasing participation of young and aspiring women cricketers at the university and grassroots level. The women’s competition was held in four zones – north, south, east and west – with the winners of the zonal editions going on to play in the national finals. A few players participating in the women’s championship also got an amazing opportunity to interact with Smriti Mandhana.
Final Match scorecard:
In the finals of Red Bull Campus Cricket Women’s edition. Rizvi College Mumbai beat Gargi College Delhi by 3 wickets. Rizvi College won the toss and chose to bowl first. Match Scorecard: Gargi College, Delhi-81/7 (20 overs); Rizvi College Mumbai- 82/7 (12.4 overs). Nirmal Kashish from Rizvi College Mumbai won player of the match award for picking up 3 wickets in 4 overs.
Gargi College Delhi- 81/7 (20 overs)
Rizvi College Mumbai- 82/7 (12.5 overs)
Rizvi College Mumbai won the match by 3 wickets and were crowned the first ever Red Bull Campus Cricket Women’s champions
Red Bull athlete and star India’ batter Smriti Mandhana shared her thoughts on the first ever women’s edition of Red Bull Campus Cricket, she said, “It’s a start for something special. I am very happy that Red Bull are the pioneers of starting a women’s edition of Campus Cricket in India. I understood more about RBCC by watching the men’s tournament. I am very happy that it took off in the 10th year of Red Bull Campus Cricket and I am sure it will have many more editions and will grow with huge participation across more cities over the next few years.”
On winning the first ever Red Bull Campus Cricket Women’s edition Tanisha Gaikward captain of Rizvi College, Mumbai , said, “We are absolutely delighted to be the winners of the first ever women’s edition of Red Bull Campus Cricket, it is a very special feeling. We are proud as a team to have come so far and show consistency throughout the tournament. Would like to thank Red Bull for organizing this wonderful tournament for women as well, as it will be a platform for young and aspiring women cricketers to take up this sport.”
Road to RBCC Women’s Finals:
In Delhi, Gargi College won their fixtures against Laxmi Bai College by a whopping 70 runs, followed by an easy win against Maitreyi College, who were bundled out for just 25 runs. They also won their pre-qualifier against SGM College from Ranchi by 22 runs to seal the spot in the finals as Sapna took five wickets for Gargi College. Earlier, SGM College from Ranchi made it to the pre-qualifier round when they beat Marwari College by 71 runs. Reena Khalkho was instrumental in this win as she scored 54 runs and took two wickets.
Dr. MGR Janaki College from Chennai won their opening clash against SSS Jain College by 87 runs, and that win helped them grab the spot in the pre-qualifiers against Rizvi College. Mythili J played a quick-fire 87 runs knock and also took one wicket for Dr. MGR Janaki College. Heavy rainfall forced the cancellation of the match between Dr. MGR Janaki College and JBAS College. The former made it to the next round with the help of superior Net Run Rate (NRR).
Rizvi College remained unbeaten during the group matches, as they beat Joshi-Bedekar College and Rizvi Junior College to clinch the spot in the pre-qualifier. In the pre-qualifier, they played against Dr. MGR Janaki College from Chennai, Janvi Kate shone with the ball. She took four wickets in just 2.5 overs and Rizvi bowled the opposition out for just 71 runs. They chased down this modest total in just 11 overs without losing any wicket to book a spot in the finals against Gargi College.