Lot of accidents transpire in traffic, of which reasonable number occur because of non-visibility of vehicles during night travel 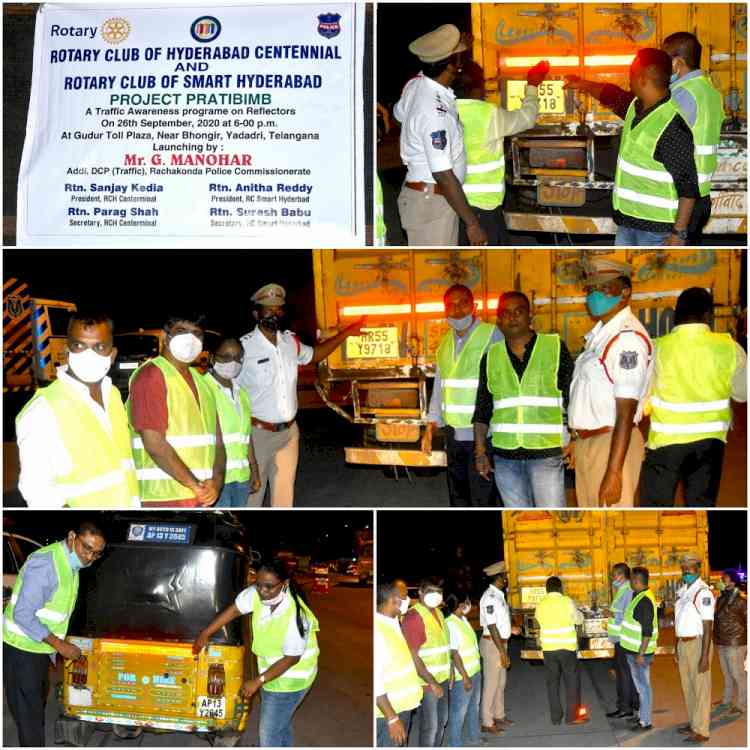 Rotary Club of Hyderabad Centennial, Rotary Club of Smart Hyderabad, in association with a Telangana Police embarked on a novel project called ‘Pratibimb'.

Hyderabad: Absence of Reflectors add to the accidents. Rule book specifies but many do not follow.

Rotary Club of Hyderabad Centennial, Rotary Club of Smart Hyderabad, in association with a Telangana Police embarked on a novel project called ‘Pratibimb’, a traffic awareness program on Reflectors.

When drivers are blinded by the lights of an oncoming vehicle, they tend to crash into a vehicle ahead of them. A reflector can forewarn them of the impending danger”.

RTA has been strictly implementing Rule 104 of the Central Motor Vehicles Rules. According to it all motor vehicles should have  read reflectors. But, unfortunately not many follow this rule.

Lot of accidents transpire in traffic, of which reasonable number occur because of non-visibility of vehicles during night travel. Most of the commercial vehicles in India keep stirring without proper rare light arrangement or reflectors. As per Motor Vehicles Act, Sl.No. 104, arrangement of reflectors is mandatory. Unfortunately, its always been ignored by most of the commuters.

Rotary Club of Hyderabad Centennial organized and Rotary Club of Smart Hyderabad organised this drive as part of traffic awareness program on promoting usage importance of Reflectors on vehicles along with pasting of reflectors at free of cost to the vehicle which are not with Reflectors.

The Process
The club Volunteers  beamed the light behind the vehicle once it stopped at toll gate, If the vehicle was not with reflector the vehicle was taken to a side with the help of Police and the drivers were given orientation, importance of Reflectors. The volunteers swiftly pasted the strip of reflector behind the vehicle at free cost. Around 100 Vehicles were attended to  in the entire drive includes commercial Heavy vehicles, Tippers, Loaders, Tractors, RTC Buses and passenger autos.

Bilaspur lad on a mission to train youth in two -wheeler...