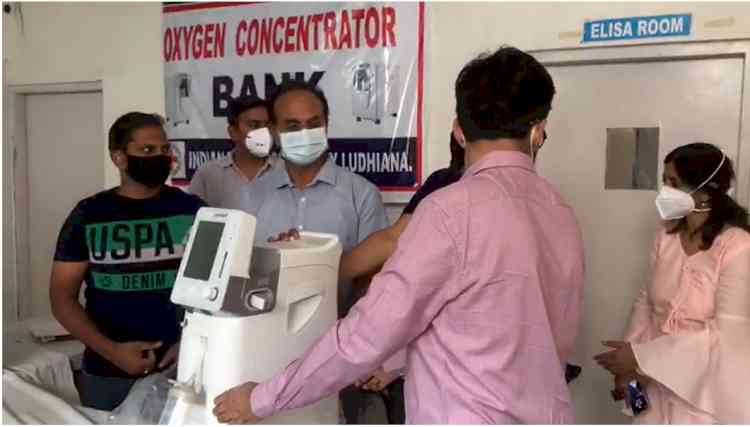 Ludhiana: With Ludhiana witnesses an unabated surge in the Covid cases and demand for oxygen has peaked, the Red Cross Society has started an oxygen concentrator bank for the patients requiring the support of life-saving gas in home isolation.

Inaugurating the bank in Red Cross Bhawan, Deputy Commissioner accompanied by Additional Deputy Commissioner (D) Sandeep Kumar, Civil Surgeon Dr Kiran Ahluwalia Gill, informed that as many as 25 oxygen concentrators have been donated by NGO to the administration which would be given to the needy patients through the bank.

He said that home isolated Covid patient can take it from the bank on mandatory doctor's prescription and guarantee of device's functioning under his supervision. He said that the oxygen concentrator applicant has to pay a minimal daily rent of Rs 200 to the administration and submit refundable security of Rs 25000 (either draft or cheque) to the Red Cross Society.

He added that concentrator seeker has to submit an online google form on www.Ludhiana.nic.in and the applicant would be informed on the phone once the application is accepted within 12-hours. The applicant can procure the concentrator from Red Cross society from 9 am to 5 pm, he said and added that the decision has been taken on the recommendation of the seven-member committee of doctors. Further, Sharma said that the applicant can also contact 94173-76655, 98784-50219 and 81465-55493.

He said 81 concentrators are being used for the patients in the government hospitals of the district.

Deputy Commissioner told that an oxygen concentrator is a medical device that takes in air and separates the oxygen and delivers it to the patient via nasal cannula.

He told the concentrators would prove useful in the treatment of patients in home isolation having mild symptoms and would be helpful to reduce the caseload on the hospitals.

Further on the advice of the committee, now hospitals can also give oxygen cylinders for patients in recuperated from the infectious disease to fight post-illness. He said that administration will supply the oxygen to the hospitals as per demand and till today, Ludhiana has not witnessed a dearth of life-saving gas.

Tewari raises case of suicide by Balachaur youth in Delhi...