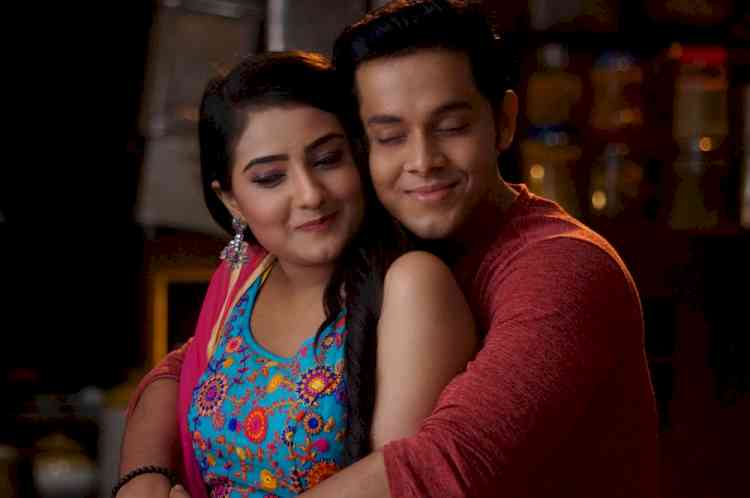 Akshita Mudgal as Gayatri and Akshay Kelkar as Abhishek on Sony SAB's Bhakharwadi.

It is often said that - a true friend is hard to find, but these two artists from Sony SAB’s Bhakharwadi have found this treasure right on the sets in the most unexpected situation and time. Akshay Kelkar and Akshita Mudgal, popularly known for their sweet chemistry as Abhishek and Gayatri (Abhiyatri) on Sony SAB’s slice of life show Bhakharwadi have found a true friend in each other.

Akshay and Akshita have been working together for more than a year now on Sony SAB’s Bhakharwadi which is a light-hearted take on ideological differences between a Marathi and Gujarati family competing with each other, in the Bhakharwadi business but things take a different turn when Abhishek and Gayatri from respective Marathi and Gujarati family fall in love with each other.

While the viewers witness a beautiful bond and chemistry between the two on-screen, their journey off-screen is equally exciting and sweet.

Here's what Akshita and Akshay have to say about their friendship

Speaking about her journey with Akshay on Bhakharwadi, Akshita Mudgal said, “Akshay and I worked on a short project three years before Bhakharwadi and fate brought us together again on the sets of Bhakharwadi. While I instantly recognized Akshay, he couldn’t recognize me because I had changed a lot during those three years. It was an unusual and hilarious first day on the set.”

Talking about the bond that she shares with her on-screen husband, she said, “We share a great rapport as co-stars because we are friends first and that roots from the fact that we value each other’s opinions a lot. We have great respect for the work we do and we often sit together and work on a crucial scenes. We don’t hesitate to suggest anything to each other and that is rare between any co-stars. Behind the camera, we both are defined as Tom and Jerry of the set. I am really glad to have a friend like Akshay and the journey so far has been a great experience.”

Akshay Kelkar, delighted to share a memorable instance with Akshita, said, “My birthday was on the last day of the shoot during the lockdown and we were shooting for 15-16 hours straight. While I was delivering a scene around midnight, Akshita somehow managed to arrange a cake and surprised me. That was not all, she even arranged a rose bouquet and gifted me something no one has ever thought of gifting me – a stuffed teddy bear. As unusual as it was, I loved it. I was overwhelmed by this sweet gesture. Akshita is a person who would always be one of my closest friends. We have had the most exciting journey so far and I look forward to creating more memories as we go ahead.”

Besides Akshay Kelkar and Akshita Mudgal, Bhakharwadi also features some of the most loved television actors such as Deven Bhojani and Paresh Ganatra.