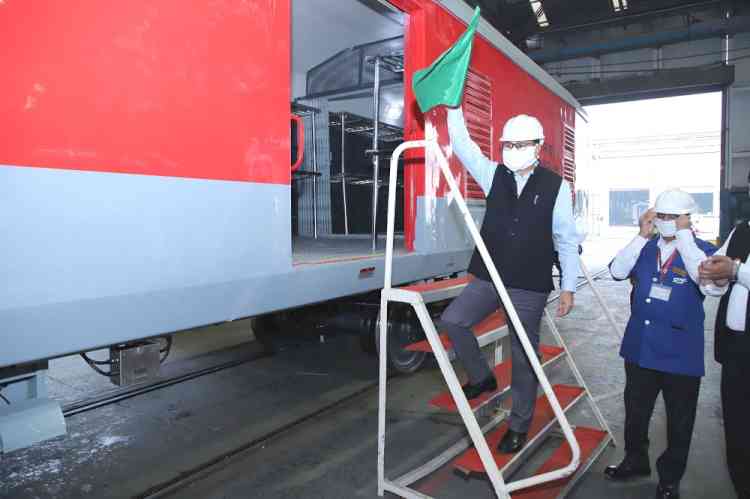 flag off being done by GM RCF.

Earlier in Jan’2020, RCF had rolled out the first 24 Ton capacity LHB parcel van Mark-I to deliver light goods to every nook and corner of the country at high speed. These parcel coaches become very useful to Indian Railways which is facing a stiff competition in parcel Business. Since then, RCF kept on producing these parcel coaches on a massive scale. RCF has already delivered 212 parcel coaches in present fiscal.

Under the major design improvements, mild steel luggage racks have been replaced by lightweight stainless-steel racks, while the Board & metal flooring has been redesigned to all-metal flooring. The weight of the coach has also been reduced by converting the panelled interior wall to directly painted wall and modifying the design of the roof panel. Thus, the LVPH Mark-II become 03 ton lighter than existing Mark-I parcel coaches.

First LVPH Mark-II coach has been flagged off from RCF by General Manager, Shri Ravinder Gupta, On this occasion, Sh Gupta said that the Indian Railways, and particularly the Rail Coach Factory,  albeit Covid pandemic has gone from strength to strength. During the Covid crisis, RCF continued to manufacture parcel coaches, so that the Indian Railways could transport essential goods in various parts of the country.

Also, the monthly LHB coach production rose to all time high in the last 18 years, while achieving an outturn of 5.88 coaches per day in the Oct’2020 which is a remarkable achievement. With the commissioning of this lighter weight mark-II parcel coach to service, it will make possible to parcel the heavy goods at a high speed and trains now will be able to ferry extra parcel goods equivalent to 02 coaches.  / (Rajat Kumar, Jalandhar)

Light the lamp of wisdom, dispel the darkness of ignorance

OPPOSITION SHOULD NOT DO POLITICS IN TIMES OF CRISIS: VISHAL...