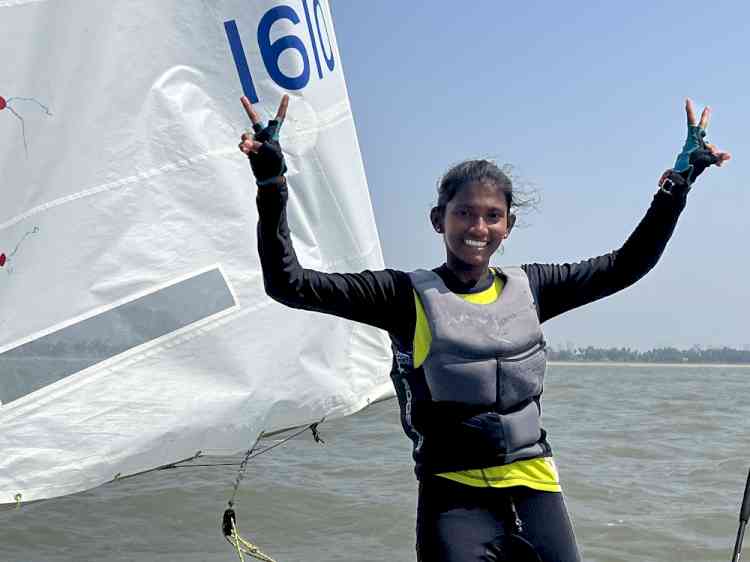 Ravali Parandi of Telangana wins the Gold at the YAI YOuth Nationals at Bombay Oct 2021.

Hyderabad, October 20, 2021: The Telangana Sailing Association is proud to announce that two of it’s sailors Ravali Parandi and Tanuja Kameshwar won the Gold and Bronze at the recently concluded Youth Nationals conducted by the Yachting Association of India off the coast at Bombay.

Ravali Parandi also won the Maj Gen. Harry Kapoor Trophy for the best sailor without a discard by a whopping 60 point lead setting a record that will be very tough to equal in future.

Ravali Parandi who is at the end of her career in the under 16 sailed brilliantly at the Monsoon Regatta at Hyderabad but had lost her chances for a medal with a few bad races. She followed it up at the Mysore Nationals in August with a Silver just behind Jhansi Priya Laveti at Gold and topped the charts at the YAI Junior Nationals with a Gold where Jhansi moved to the senior Laser class.

Tanuja Kameshwar relatively junior in experience shocked the fleet with many top 5 positions in the 10 races and closed with a Bronze, her first at a National event and that will shoot her up in the National ranking and to take a shot at the Gold at the next event.

“Getting ahead of the far more experienced Ravali and Divanyshi Mishra of Bhopal (Silver) in a few races gives me the confidence that I can win the next nationals”, said a brimming Tanuja at the end of las race of the Junior Nationals.

Both sailors study at the Udbhav School at Rasoolpura that is supported by the IIM Ahmedabad Alumni led by Mr.H.Sitaram.

‘Ravali Sailed like never before and in 4th race had a stupendous lead of 2.5 minutes over the next sailor while normally sailors finish within seconds of each other. Her reading of the winds and ability to take a lead and cover the fleet was a sheer joy to watch “, said Suheim Sheikh her Coach at the Yacht Club of Hyderabad.

“As we move from regatta to regatta our sailors from Telangana are surpassing themselves and proving that the land locked state of Telangana is far superior to all the coastal states. I congratulate Ravali and Tanuja and wish them the very best at the international level in the near future. “ said Lt.Gen. KS Rao the President of the Telangana Sailing Association that has fielded the largest number of entries at the nationals for 8 years in a row.

A stellar line up of brilliant minds at Tata Literature Live! The Mumbai LitFest...