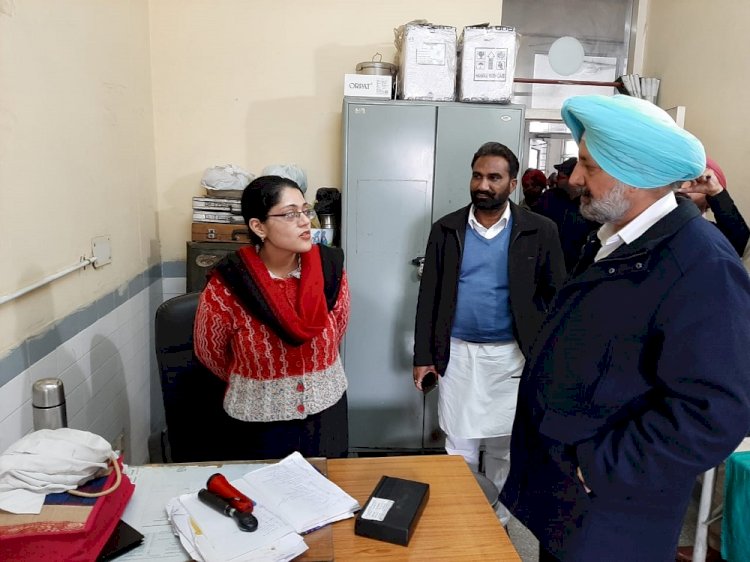 Khanna (Ludhiana): Punjab Health & Family Welfare Minister Mr Balbir Singh Sidhu today conducted a surprise check of Civil Hospital, Khanna. He not only took stock of the healthcare facilities being provided there, but also inquired about the required basic facilities there. He also directed that all grievances related to the patients should be redressed on priority basis.

During the surprise check, the Health and Family Welfare Minister Punjab found that 4 orthopedicians are appointed in the hospital, out of which only three were present today. Whereas the OPD was registered only of 56 patients. Taking strong notice of this callous attitude, he directed the senior officials that in all hospitals, where the number of specialist doctors of one disease is more than the required, their rationalisation should be done immediately.

On this occasion, Mr Balbir Singh Sidhu said that with the start of Ayushman Bharat-Sarbat Sehat Boma Yojana, the burden on all government hospitals of state has started decreasing. He said that now the patients are getting their treatment done completely free of cost from these hospitals.

Taking an aim at the previous state government, Mr Sidhu said that during the tenure of SAD-BJP government for 10 years, they did not work towards strengthening healthcare in Punjab and that is why, the residents suffered a lot. He said that ever since Capt Amarinder Singh led government was formed in the state, several doctors and other medical staff was recruited in the state and now, the healthcare facilities are improving.

On this occasion, Mr Balbir Singh Sidhu also interacted with the patients, inquired about their grievances, and assured that their grievances would be redressed on priority basis. He also directed the Civil Surgeon and Senior Medical Officer that the patients visiting this hospital should not face any problems.

He was also accompanied by his political advisor Mr Harkesh Chand Sharma, besides several others.

Assembly of 5 or more persons outside TET Exam centres banned