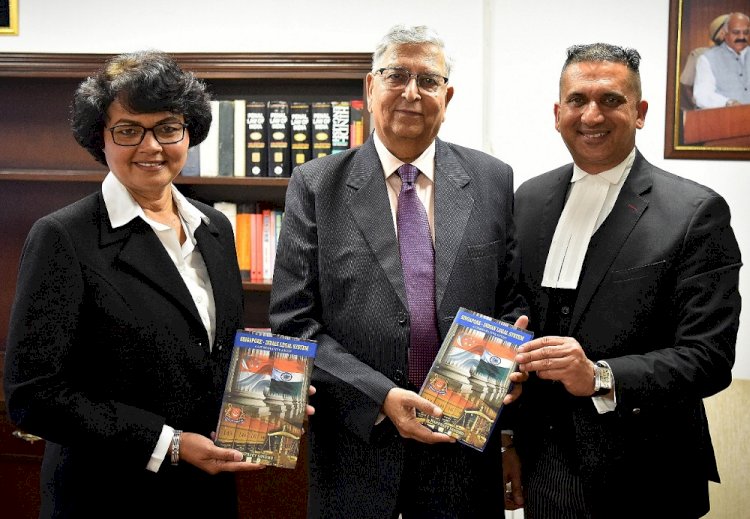 After receiving a copy of book from the author at his office here at Punjab Civil Secretariat-2, Sector-9, Justice Sharma appreciated the sincere and commendable efforts for writing this book based on his personal experience gained during his visits to the Singapore courts and comparing it with the Indian Legal Systems.

He said that it will definitely enhance the strengthening of laws of mutual interest in the working of legal profession at International level towards a better understanding of wide ranging concepts shared between Singapore and India in field of law. “The book is excellent and full of legal information. Reading of book shows that Mr. Sandhu, before attempting to write the book, had done a deep study as the finest points of legal system of Singapore, the development of structure and constitution of Singapore have been described in short, but you can know the law and the constitutional working at Singapore to a great extent”, said Justice Sharma, adding that comparison of two legal systems, it is actually an eye opener for legal fraternity.

Pertinently mentioned that book was released in the Parliament of Singapore and acknowledged by the Chief Justice of Singapore Supreme Court, Singapore Academy of Law and by the High Commissioner of India to Singapore. Solicitor General of India Mr. Tushar Mehta has also released the book in Supreme Court, New Delhi and Advocate Sandhu was conferred with "Certificate of Honour" by Chief Justice of India in Nov 2019 during Constitution day function at New Delhi. It is fourth book of the author after, German Indian Laws in 2010, European Legal System in 2013 and Judicial Services Assignments by the Judiciary of Ghana in 2014.