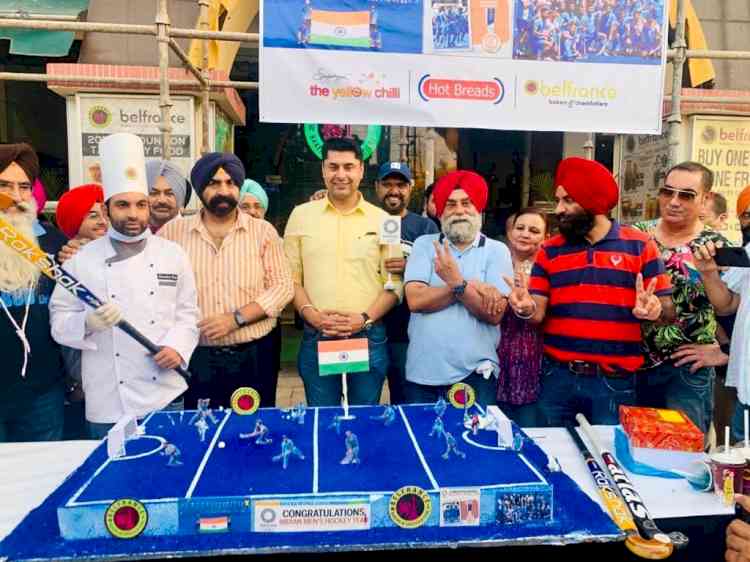 Ludhiana: With the Indian men’s hockey team winning the bronze medal in the Tokyo Olympics on Thursday morning, the Ludhiana residents celebrated the historic achievement by the Indian men’s team in the Olympics after a gap of 41-years.
Led by Punjab Youth Development Board (PYDB) Chairman Sukhwinder Singh Bindra and Hockey olympian Hardeep Singh Grewal, the people of the Ludhiana cut a special cake at the premises of Belfrance in Sarabha Nagar market, here and congratulated every member of the Indian hockey contingent for their spectacular performance in the Olympics.

Lauding the Indian hockey team, Bindra said that PYDB will give heroes’ welcome to the hockey team members once they reach their motherland and added that the players have made their country proud by winning a much-awaited medal in the national game of India. He said that the players would also be honoured with appreciation certificates.

He said that Sports Minister Rana Gurmit Singh Sodhi in the Capt Amarinder Singh led Punjab Government has already announced a cash award of Rs 1 crore to each of the Punjab hockey players, who is part of the Indian men's team. He said that the government is committed to promoting sports especially the national game for which it has been working round the clock to build and improve infrastructure in the state.

India can win 4-0 or 3-1 against England: Gavaskar (IANS Exclusive)

CERVICAL PAIN DURING LOCKDOWN AND STRATEGIES OF PREVENTION

DC warns officers of action in case of delay in lifting...