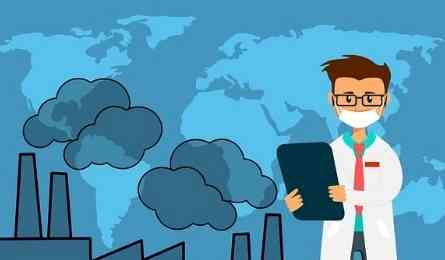 New Delhi, Sep 22 (IANS) In a move to curb air pollution that starts choking north Indian states at this time of the year, the governments of Punjab and the NCR states, including Delhi, have come up with a detailed monitorable action plans to prevent and control stubble burning, the Commission for Air Quality Management (CAQM) announced on Wednesday.

"State Governments of Punjab, NCR states and GNCTD have developed detailed monitorable action plans based on the Framework by the Commission to tackle the problem of Agricultural Stubble Burning", a tweet by the Environment, Forest and Climate Change Ministry, quoting CAQM Chairperson in NCR and adjoining areas, read.

Directions have been issued for adopting a standard protocol developed by the ISRO for recording and monitoring the fire counts owing to stubble burning with PUSA bio-decomposer being planned to be used in 6 lakh acres in UP, 1 lakh acres in Haryana, 7,413 acres in Punjab and 4,000 acres in Delhi, respectively.

According to an official communique, directions have been issued to all 11 thermal power plants within 300 kms radius of Delhi for review of the projects with major stakeholders for ex-situ utilisation of crop residue and promoting utilisation of paddy straw pellets and briquettes for co-firing in these plants.

Directions have also been issued to NCR and Delhi governments, along with road owning agencies and municipal bodies, for abatement of dust from roads and open areas through a "Dust Control and Management Cell".

In order to control and prevent air pollution from construction and demolition activities, dust control and mitigation measures will be taken. Other than that strict monitoring through a dedicated web-portal and video fencing of projects will be done.

Moreover, state-wise action plans have been prepared to control bio-mass and municipal solid waste burning and fires in landfill sites with an aim to focus on deployment of enforcement teams, quick complaint redressals, and corrective actions through IT enabled platforms.

A dedicated taskforce has also been envisaged in each NCR state to continuously monitor and take steps regularly to ensure smooth traffic management, including developing an "Intelligent Traffic Management System" (ITMS), the Ministry added.

Other than stubble burning in the neighbouring states, emission from vehicles, dust from construction sites and industrial pollution, all that comes under anthropogenic activities, add up to the menace of air pollution in the national capital and its adjoining areas during the winter season.

FBI Director warns Taliban takeover could inspire extremists in US

Farmers to remind Modi of 'forgotten promise' during Aligarh...

Savagery at Singhu: How the events unfolded?