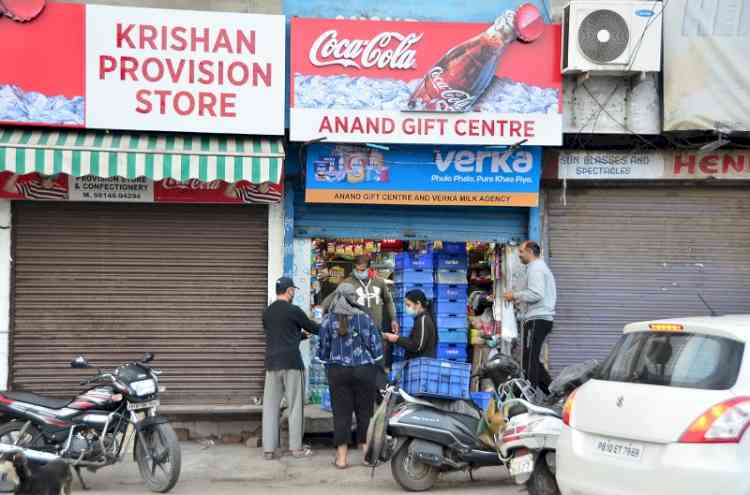 A photograph taken in Ludhiana on Thursday. (Symbolic photograph by Ajay)

Chandigarh: Taking cognizance of reports of excesses against citizens for the enforcement of the curfew in the state, Chief Minister Captain Amarinder Singh on Thursday directed the Punjab Police to be more humane and sensitive in dealing with violations.
Urging the police personnel to exercise maximum restraint in the difficult situation, the Chief Minister asked them to find more compassionate ways of handling curfew violations, especially in cases of individuals found moving out for essentials.
Use of corporal means to punish violators could not be allowed, said Captain Amarinder, directing DGP Dinkar Gupta to take all possible steps to sensitise the police personnel and warn them against taking the law into their hands in dealing with cases of curfew violation.
The Chief Minister also appealed to the people to stay at home and reach out to police and civil administration through helpline numbers etc in case of emergency. All efforts were being made to provide doorstep delivery of essential goods and services, he said, adding that the entire police and civil administration was working day and night to ensure that the citizens do not face any inconvenience or hardship.
Captain Amarinder also took note of reports of a recorded telephonic message purported to have been released by Gurpatwant Singh Pannu of the Sikhs For Justice (SFJ), and said any attempt by him or anyone else to provoke the youth of Punjab to violate the curfew would not be tolerated. It was obvious that Pannu did not care about the lives of Punjabis, he said, reacting to Pannu’s message, in which he had also reportedly warned him (Capt Amarinder) and DGP Dinkar Gupta of serious consequences of any action against violators of the curfew.
Meanwhile, DGP Gupta said while by and large the police personnel were seen to be caring and gentle, there had been a few cases of some of them using force against those found violating the restrictions. Gupta said he had directed CPs and SSPs to make it clear to the force down the ranks that there should be zero tolerance to physical beatings etc. No society can tolerate such visuals, he warned, adding that where needed, violators should be booked. Calling for patience, the DGP said “we don’t want to sully all the good work we are doing by a few aberrations here and there.”
The DGP’s warning came even as the police on Thursday registered 170 FIRs and arrested 262 for curfew and home quarantine violations. Out of total 170 FIRs, four were registered for violation of home quarantine guidelines, with three FIRs registered in Sangrur and one in Bathinda.
As of today, a total of 40153 police employees in different rank had been deployed on the ground in various Districts / Police Commissionerates of Punjab for enforcement of curfew as well as maintenance of essential supplies. These included 1937 volunteers.
While the maximum of 38 FIRs for curfew violation were registered in Kapurthala, 19 in Taran Tarn, 14 in Commissionerate Jalandhar, 13 each in Commissionerate Amritsar, Jalandhar Rural and Fatehgarh Sahib, 12 in Hoshiarpur, 11 in Ropar, nine in Barnala, seven in Sangrur, six in Commissionerate Ludhiana, three each in Mansa, Bathinda and Sri Muktsar Sahib, followed by two each in Ferozepur, Khanna, SAS Nagar, Batala and Amritsar Rural, while one case each had been registered in Moga, Shaheed Bhagat Singh Nagar, Pathankot and Gurdaspur. The districts which had zero violation of curfew were Faridkot, Fazilka, Ludhiana and Patiala.
DGP Gupta said the maximum number of 60 persons were arrested from Kapurthala. While 30 persons had been arrested in Ropar, 22 were taken into custody in Fatehgarh Sahib, 19 in Barnala, 17 Jalandhar Rural, 16 Taran Taran, 14 Jalandhar Commissionerate, 12 each in Amritsar Commissionerate and Hoshiarpur, 11 Sangrur, seven each in Gurdaspur, Seven Gurdaspur, SAS Nagar and Sri Muktsar Sahib, six Ludhiana Commissionerate, five Mansa, four Bathinda, two each in Khanna, Batala and Ferozepur and one in SBS Nagar.

Curfew relaxed in Himachal for 7 am to 11 am from Friday: CM

Rakhis to be received at outer gate of Punjab jails from...