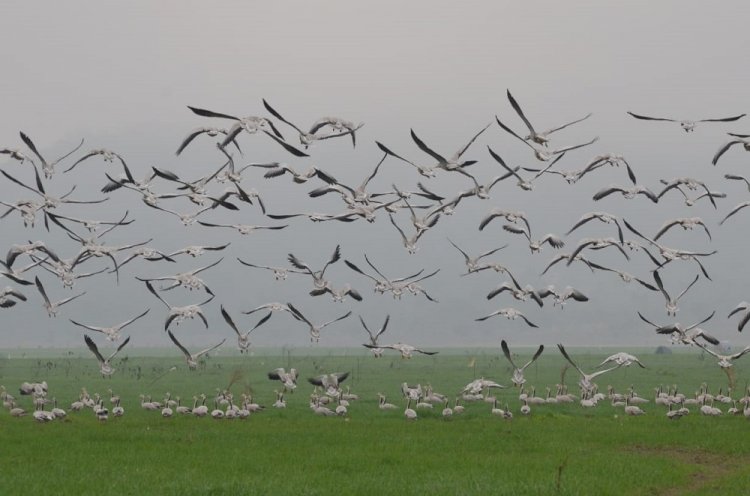 “Entire Pong Dam Lake Wildlife Sanctuary was divided into 26 Sections. About 150 persons participated in this exercise. it has been concluded that 115701  birds of 114 different species have been recorded at Pong Dam Lake this year, that include 104032 migratory water fowls of 60 Species,10377 resident water birds of 30 species and 1292 birds of 24 other local Species,” added Dr Savita

“Total population of Birds as well as species of birds have shown an increase over last year. Population has shown marginal increase from 115229 to 115701 where as species have increased from 103 to 114. No of migratory water dependent species as well as resident water dependent species have also show an increase over the last year from 58 to 60 species and 29 to 30 species respectively. The population of Flagship Species of Pong Lake ,Bar-headed Geese have shown 68% increase from last year (2018-19) as the total count was  29443 as compared 49496 Bar-headed Geese this year,” she said.

Population of birds and number of species is expected to increase in coming days during return journey to their breeding grounds as birds from North-West, Central and South India will start arriving at Pong Lake.

Most of these birds migrate from their breeding places in Trans-Himalayan region in Tibet, Central Asia, Russia and Siberia. Over the last few years , Pong Dam Lake also a Ramsar site, has become an ideal destination for winter sojourn for many species of Migratory birds.

In general, 425 Species of Birds have been known to occur in Pong Dam Lake Wildlife Sanctuary that includes terrestrial as well as summer migrant birds which could be primarily attributed to the varied habitats, food availability, intervention done and protection extended by the staff of wildlife wing and active involvement of local communities.