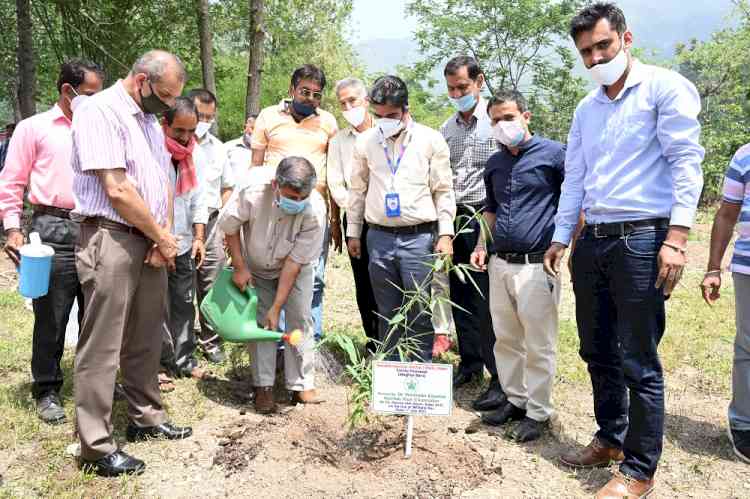 Nauni (Himachal Pradesh): The Department of Silviculture and Agroforestry, Dr. YS Parmar University of Horticulture and Forestry, Nauni celebrated Van Mahotsav at the university campus on Thursday. The event was sponsored by the State Bank of India to mark the 66th anniversary of the bank. Over 500 plants of bamboo, Bauhinia Variegate (Kachnar),and Grewia Optiva (Beul) were planted today. In the coming week, over 1,600 plants of different species will be planted on the university campus.

Addressing the gathering, Dr. Parvinder Kaushal, Vice-Chancellor said that it was important that we choose location-specific tree varieties during plantation drives so that they can grow properly in their local environment and high survivability can also be ensured. Dr. Kaushal said that in a state like Himachal, it was important that we carry out mass plantations in the winter months along with the rainy season. He said many fruit trees can be planted in the winter months and such activities on a mass scale must be promoted. He also called for promoting large-scale planting of wild species of fruits in the forests so that the animals can be provided food in their natural habitat. He said that the university will develop a plantation schedule for different seasons so that the green cover of the university can be increased.

Dr. Kaushal congratulated the State Bank of India on its foundation day. Jawahar Kaul, Regional Manager SBI Solan said that it was a great occasion as two great institutions were collaborating to greening the environment. He said that the bank will contribute to more such activities under its corporate social responsibility.

Back strong leader like Modi or India may meet Af's fate:...

Flood situation in Bengal displaces over 3L people from...