Pilot meets Rahul twice in a week, bells of change ringing in Rajasthan? 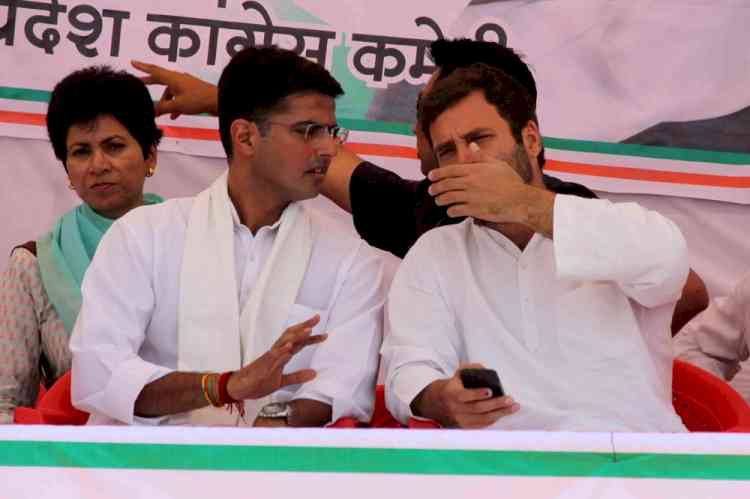 The meetings gain significance ahead of a possible cabinet reshuffle in the desert state.

Pilot had met Rahul Gandhi in the national capital over the last weekend, while he called on him again on Friday evening, this time in the presence of Congress General Secretary Priyanka Gandhi.

The meetings have given momentum to the speculation that some serious political considerations are going on behind the scenes, though there is no official word on it from either side yet.

The meetings have reportedly created uneasiness in Chief Minister Ashok Gehlot's camp in Jaipur, sources said, as the Congress high command is believed to be upset with Gehlot's delaying tactics with regard to the cabinet reshuffle. So there may be a Punjab-like operation in Rajasthan as well if things do not change.

Rahul Gandhi has also discussed the issue with Rajasthan Speaker C.P. Joshi, whom he met last week before leaving for Shimla.

There is a strong buzz in the Congress that Pilot will return as the Rajasthan Pradesh Congress Committee chief, or may be even as the Chief Minister ahead of Assembly elections scheduled in 2023.

Gehlot may be appointed as the Congress General Secretary, Organisation, or the party's Gujarat in-charge, a responsibility he had held in the past.

He may also be appointed as the Working President to curb all the simmering dissent in the party, given that another senior leader Kamal Nath seems reluctant to leave Madhya Pradesh.

The party is likely to push for a reshuffle in the All India Congress Committee (AICC) to put its house in order in different states. This has raised hopes in Chhattisgarh and Rajasthan, where two CM aspirants -- T.S. Singh Deo and Pilot -- are waiting for their turn.

In the 2018 Assembly polls in Rajasthan, the Congress had won 99 out of 200 seats. Gehlot was then made the Chief Minister even though he was not the CM face during poll campaign.

The Lok Sabha polls were held five months after the Assembly elections, in which the Congress drew a blank in Rajasthan, losing in all the 25 seats.

The next Assembly polls are scheduled in 2023, and the party is reportedly contemplating a new CM face so that the 2019 Lok Sabha results are not repeated in the 2024 general elections.

Some major changes are expected in Rajasthan in the coming few days.

In fact, the party's Rajasthan in-charge Ajay Maken had said last week that the roadmap is ready for cabinet expansion and organisational rejig in the desert state.

Huge turnout at police officer's funeral reminds one of...