Theme of conclave was experience the potential of cinematic tourism 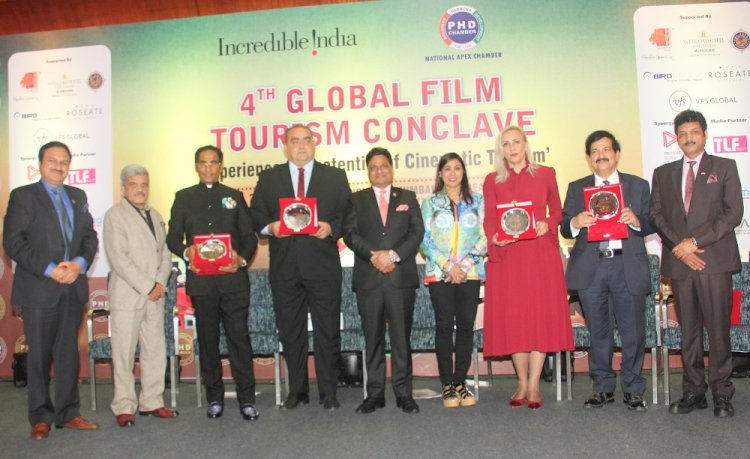 New Delhi: PHD Chamber of Commerce and Industry (PHDCCI) organized the 4th edition of Global Film Tourism Conclave with the theme ‘Experience the potential of Cinematic Tourism’ on 21 January 2020 at Novotel, Mumbai, Juhu Beach. The programme was supported by the Ministry of Tourism, Government of India. Producers Guild of India was the Synergy Partner for the programme.

H.E. Eleonora Dimitrova, Ambassador, Embassy of the Republic of Bulgaria and H.E. Radu Dobre, Ambassador of Romania gave a detailed presentation on the locations and incentive schemes for film shootings in their respective destinations.

Leading Indian Filmmaker, Anil Sharma maker of blockbuster Gadar-Ek Prem Katha and noted Producer and Managing Director of Tips Industries, Ramesh Taurani who produced movies like Race, Race 2, Race 3, Entertainment and many others, were felicitated during the programme for their contribution towards the Indian Cinema. They requested to curb the lengthy process of approvals and permissions to shoot in India and urged the state tourism boards to come out with film industry friendly policy.

Dr. D K Aggarwal, President, PHDCCI, said, “PHD Chamber and Ernst & Young have jointly released a report, which states that Film Tourism has a scope to generate $3 billion by 2022 in India as there is potential for up to 1 million film tourists to visit the country by 2022”. However, to achieve this potential, there is an urgent need to simplify, incentivize and promote this segment. All state governments must consider setting up of online portals for single window clearance facility.”

The Conclave was attended by over 150 delegates that included Production Houses, Ambassadors, Consul Generals, State and International Tourism Boards, Tour Operators, Hotels and Resorts among others.