It was organized to increase mutual coordination 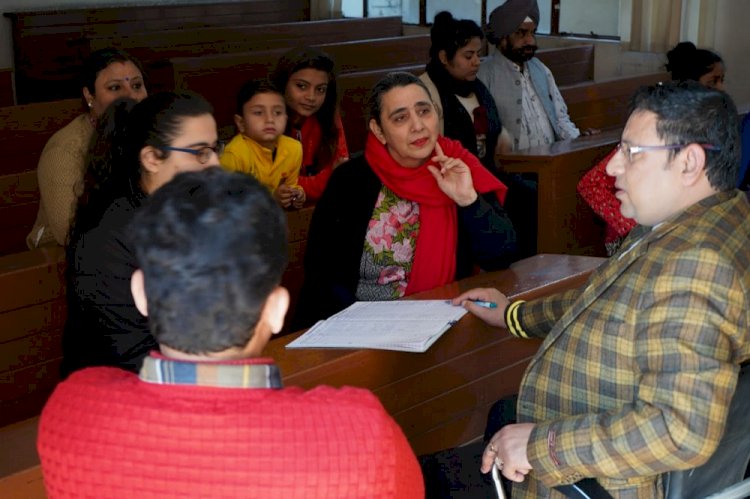 Jalandhar: In DAV College, a parent teacher interaction was organized to increase mutual coordination between parents and teachers. The main purpose of which was to make children self-reliant through interaction between parents and teachers.  During this time, efforts were made to share the things related to the personality of the students and to know their shortcomings.  Efforts from both sides would be  made trying to remove whatever deficiencies in the child at the academic level were also discussed in this meeting.

During this time, all the departments of the college, led by their departmental heads, met all the parents in their respective departments, where they shared their academic reports of their students, their interests and ideas to improve their future.

During this time the Principal of the college, Dr. S. K. Arora in his message said that the responsibility of both teacher and a parent is very important in the development of children.  Reaching the college level increases this responsibility even more.  Because from this time the foundation for the  future of the students is laid down.  Parents should have a good and coordinating relationship with the college in discharging  this role.  To do this, a forum is needed where teachers, parents and children are present together.  The college is a place where children from every community come and receive education, thereby connecting the learning and culture of their community.  He further said that the main objective of organizing Parents teacher interaction in the college is to give the parents educational information of their child and to make them aware of the academic activities of the college and get their suggestions and motivate the children to further improve the standard of education and life.

Dean of Internal Quality Assurance Cell Dr Said K Tuli said that this interaction was extremely successful, we have received more than six hundred parent feedback forms, in which college management will soon take a positive step on the suggestions given by parents

The parents of the students were very happy with this parent teacher meeting.  They said that in this meeting, they discussed in detail with the  teachers about the marks received by their children, their interest, their future and what they can do well.  This initiative of college will bring qualitative changes in children.  If there are some deficiencies inside the children, then they can be rectified in time.

Parents believed that such meetings should be organized from time to time. With this, they will be able to know the activities of their children and can also see their future in the right way.

Mr Rajan Oberoi, father of Anuja of B. Com sem 2, said that many times some parents do not know about new technologies and different jobs and fields for the futures.  And many times they stop their child from doing something new due to the fear that they may not move in the right direction.  But with this parent teacher meeting , they can talk about all these to their childrens' teachers and give the right direction to their future plans.  So that their dreams do not end.

During this entire meeting, a joy was seen on the faces of the parents that their children are shaping their future under the supervision of a right institution.

Expert talks of International Speakers in CIET-2021 at...