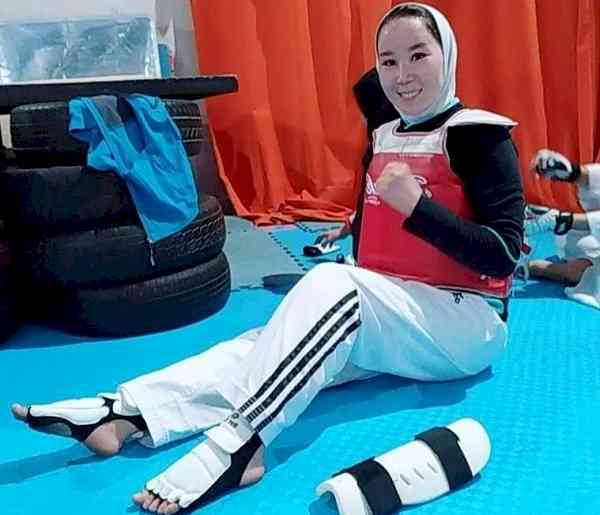 Tokyo, Aug 28 (IANS) Afghanistan will eventually have its first female athlete to compete at the Paralympic Games since 2004 as Zakia Khudadadi made a dramatic entry at the Tokyo 2020 Games, five days after the country's flag was made part of the opening ceremony.

Zakia and Hossain Rasouli are part of the Afghanistan Paralympic Team that arrived in Tokyo on Saturday, after being evacuated from the worn-torn country as part of an international collaboration. It was said a few weeks back that they may not be able to make it to Tokyo because of the chaos caused by the Taliban's takeover of the country.

Following their safe evacuation from Afghanistan last weekend, the two athletes spent the week in Paris, France, at the National Institute of Sport Expertise and Performance (INSEP), the French sports ministry's high-performance training centre. On Friday (August 27) evening the pair boarded an 11-hour flight from Paris Charles de Gaulle Airport to Tokyo Haneda Airport before being transported to the Paralympic Village, the IPC said in a statement.

Andrew Parsons, IPC President, said: "Twelve days ago we were informed that the Afghan Paralympic Team could not travel to Tokyo, a move that broke the hearts of all involved in the Paralympic Movement and left both athletes devastated. That announcement kickstarted a major global operation that led to their safe evacuation from Afghanistan, their recuperation in France, and now their safe arrival in Tokyo.

"We always knew there was a remote chance both athletes could participate at Tokyo 2020 which is why the Afghan flag was paraded at Tuesday's Opening Ceremony. Like all the athletes here at Tokyo 2020, we never gave up hope, and to now have Zakia and Hossain in the Paralympic Village alongside 4,403 other Paralympians shows the remarkable power of sport to bring people together in peace," said Parsons.

The IPC chief said the reason they were taken to Paris first was to ensure their safe health.

In line with the rules of the Playbooks, the two athletes returned two negative PCR tests for COVID-19 in the 96 hours and 72 hours before departure and were tested once again upon arrival at Haneda Airport.

"Our number one priority has and always will be the health and well-being of both athletes. Over the last 12 days, Zakia and Hossain have continued to express their absolute desire to come and compete at the Tokyo 2020 Paralympic Games," he said.

Zakia will be Afghanistan's first female athlete to compete at the Paralympic Games since Athens 2004 when she competes in the women's K44 -49kg weight category in taekwondo on September 2. Hossain will line up in the heats of the men's 400m T47 athletics event on September 3.