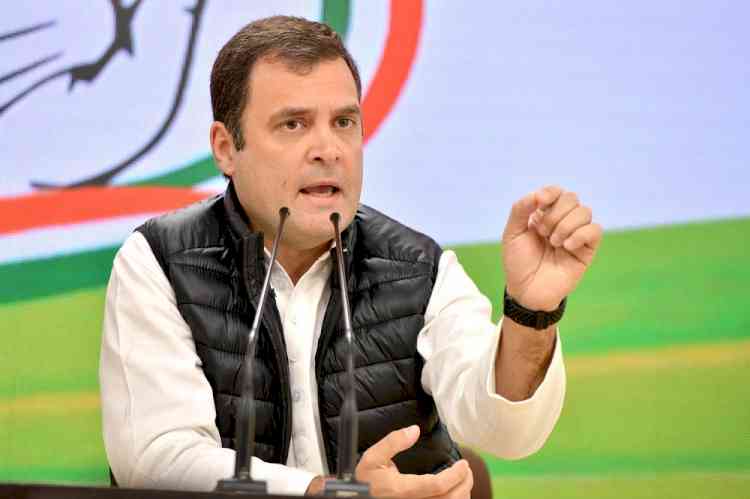 New Delhi, Oct 4 (IANS) An RSS-linked magazine has taken potshots at the Congress and its former President Rahul Gandhi, saying the country's oldest political party is passing through its "worst-ever phase" due to "an immature and careless leader".

In its cover story on Rahul Gandhi for the October 10 edition, the Panchjanya, criticised the working style of the Congress leader, saying "the rahu kaal (bad phase) of Congress begins with Rahul".

Citing the internal bickering and disagreements in the Congress, the magazine said as long as seasoned leader Ahmed Patel was alive, he used to prepare party strategies on the basis of party interim chief Sonia Gandhi's suggestions, and also provided "necessary balance" to Rahul Gandhi. However, the situation has changed now, the magazine noted.

Alleging that Rahul's sister Priyanka Gandhi, the party's General Secretary, and her husband Robert Vadra, have their own "ambitions", Panchjanya said even Vadra believes that his wife has more potential than Rahul Gandhi, and she is not just capable of contesting election from any seat but also emerging victorious.

Taking a dig at the Congress high command, Panchjanya accused the Congress, during its long period of governance, of only promoting division among people and poverty, and now since it is out of power, the party is struggling with infighting.

It also held the "owners of the house" responsible for the current political scenario the Congress is dealing with in Chhattisgarh and Rajasthan.

The magazine also questioned the Congress over former Left leader and former JNUSU President Kanhaiya Kumar's inclusion into the party fold, saying "tomorrow he might claim to be a taller leader than Rahul Gandhi by standing on his shoulders".

It further said the Congress needs to do some serious introspection to save the party, adding it is necessary to have a competent Opposition in the democracy, and "it's not the responsibility of those in power to strengthen the Opposition".

The Panchjanya had been in the news for its previous issues attacking Infosys and its leader N.R. Narayana Murthy over the glitches in the income tax portal, and then Amazon and its chief, Jeff Bezos, calling the global e-commerce giant "East India Company 2.0".

Lakhimpur Kheri violence: Akhilesh sits on protest after being stopped by police