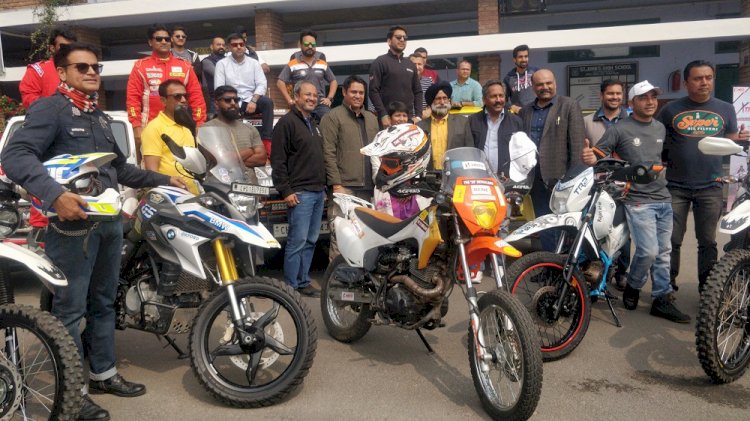 Chandigarh: The 33rd edition of the Hero SJOBA Rally will be organized from February 28 – March 1, 2020 in Punjab and Himachal Pradesh and will be flagged-off from St Johns High School, Chandigarh.

The oldest rally in the region, the Hero SJOBA Rally is organized by St. John’s Old Boys Association (SJOBA). This is the second consecutive year that Hero MotoCorp, the world’s largest manufacturer of motorcycles and scooters, is the title sponsor of the Rally.

In its 33rd edition, the Rally will witness over 90 competitors in the cars and bikes categories, with the highest ever participation of female competitors.  Over the years, top rally drivers and riders in India have participated in this Rally, which is a regular event on the official calendar of the Federation of Motorsports Clubs of India (FMSCI).

Talking about the Rally and association with Hero MotoCorp, Sorabh Tayal, President, SJOBA said, “We are very happy that the world’s largest two-wheeler manufacturer and a global brand, Hero MotoCorp, has continued to stay on-board as the Title Sponsor of the Rally for the second consecutive year. We thank them for the support and expect the Rally to become even bigger and more popular now.”

The Rally will start with detailed scrutiny of the vehicles in Mohali on Day 1, followed by the SSS (Spectator Stage). Day 2 will see the competitive stage being flagged-off, post which the competitors will cover approximately 200-250 kms daily in the picturesque locales of Punjab and Himachal Pradesh.

This year’s route has been revamped to ensure new competitive sections, which would put to test both man and machine over a rigorous period of two days. Additionally, the routes include dense shrubbery, riverbeds and a night stage as well.  The terrain is a mix of plains, hills, plateaus and forests, which has roads varying from asphalt passes to rough forest tracks and tarmac roads.

The Rally will culminate with the felicitation ceremony in Chandigarh on March 1, 2020.

Hero MotoCorp is one of the largest global corporate promoters of various disciplines of sports including Cricket, Golf, Football, Field Hockey and Motorsports. Synonymous with global marquee sports partnerships, the Company came on-board with SJOBA Rally in 2019 to promote the culture of motorsports in the country. Hero MotoCorp’s rally team, the Hero MotoSports Team Rally, has emerged as one of the flag-bearers of Indian motorsport in the global arena. With its products like the XPulse 200 and the recently launched XPulse 200 Rally Kit, Hero MotoCorp is providing avenues to enthusiasts and amateurs to pursue motorsports.

Hero MotoCorp will also host its exciting ride event, XTracks – Live the Thrill - in tandem with the Hero SJOBA Rally.

The event – to be held on Friday, February 27, at JLPL City, Sector 66 A, JLPL Industrial Area, Sahibzada Ajit Singh Nagar, Mohali, from 7am till 12pm – will provide bike enthusiasts in the region the opportunity to hit the dirt on the 2020 Indian Motorcycle of the Year - the Hero XPulse 200.

Starting with this edition of the XTracks, Hero MotoCorp will also provide participants the opportunity to ride the recently launched XPulse Rally Kit.

The Rally Kit transforms the XPulse 200 into an accessible and competitive purpose-built machine, enabling enthusiasts to improve their off-roading skills and test their limits. It also encourages young riders to build a career in motorsports. The Rally Kit comprises of Front fully-adjustable telescopic fork with 250mm stroke and fully adjustable 10 step rear Mono shock with 220 mm stroke. Upping the comfort quotient and riding stance is a host of features - the Flat ‘bench’ seat, handle bar risers, increased ground clearance of 275mm, rally tyres by Maxxis, longer side stand and an extended gear lever to accommodate off-road style boots.

The XTracks event has witnessed overwhelming response from riders in the cities where it has already been held, including in Delhi, Chennai, Bengaluru, Mumbai, Kolkata, Lucknow, Pune, Kochi and Guwahati.

Defending champions Lagat and Alemu ready to do battle...