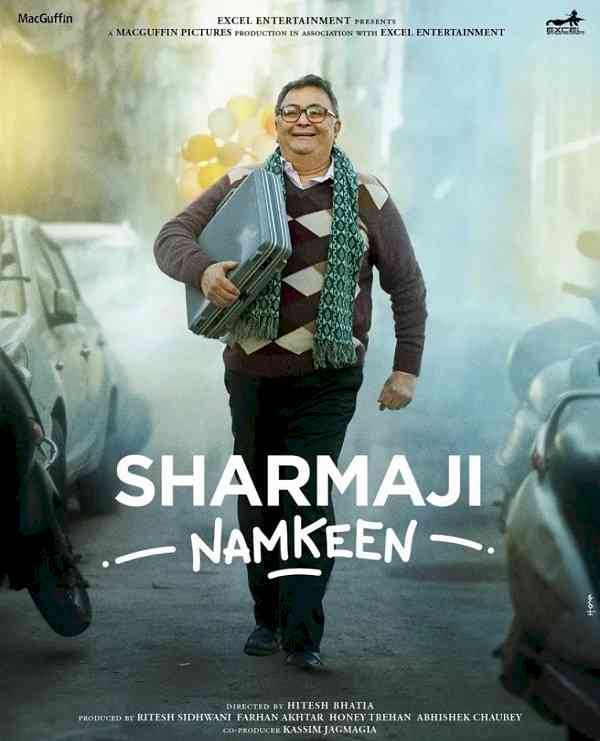 The poster was shared on the official Instagram handle of Farhan Akhtar and Ritesh Sidhwani's Excel Entertainment on Saturday morning.

In the photograph, the veteran actor is seen holding a briefcase. He is smiling ear-to-ear as he walks on an empty road dressed in a brown sweater paired with a green muffler and black pants.

Alongside the poster, the caption read: "We are proud to present, the poster of a very special film -- Sharmaji Namkeen, starring one of the most celebrated actors in the Hindi film industry whose inimitable work and sparkling career we will cherish forever, Mr. Rishi Kapoor.

"As a mark of love, respect and remembrance of him and as a gift to his millions of fans, here is the first look of his final film."

"A big thank you to Mr. Paresh Rawal, who completed the film by agreeing to take the sensitive step of portraying the same character played by Rishi Ji. Produced by Excel Entertainment and MacGuffin Pictures, directed by debutant Hitesh Bhatia, this film is a light hearted, coming-of-age story of a lovable 60-year-old man," the caption shared in the new poster starring Paresh Rawal was also shared by the banner.

Bharat Bhushan Ashu launches ICMR Project of timely intervention to save lives from...

These top 4 looks of Krushna and Bharti from FMJ are a...

When I became a genie on the show, I had to use the hoverboard