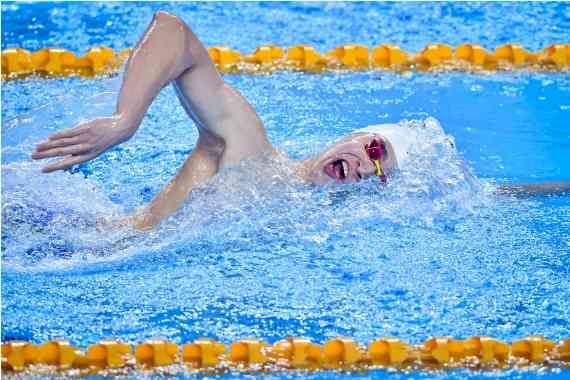 Tokyo: Caeleb Dressel of the United States won his fourth gold at the Tokyo Olympics triumphing in the men's 50m freestyle here on Sunday.

The reigning world champion touched home in an Olympic record time of 21.07 seconds, 0.48 seconds before Florent Manaudou of France. Bruno Fratus of Brazil took a bronze in 21.57 seconds.

The 24-year-old Dressel has had three gold prior to Sunday's final -- from 100m freestyle, butterfly and 4x100m freestyle relay.

Defending champion Pernille Blume of Denmark came third in 24.21 seconds. This is the sixth medal in Emma's fruitful journey in Tokyo, after two gold and three bronze medals.

Robert Finke of the United States won the men's 1,500m freestyle, his second gold in Tokyo after the first from 800m freestyle.

With a quick sprint in the last 50m, Finke broke out from the fierce competition, finishing in 14 minutes and 39.65 seconds to stand on top of the podium again in his Olympic debut.

Mykhailo Romanchuk of Ukraine touched home 1.01 seconds behind, adding a silver to his 800m freestyle bronze. Florian Wellbrock of Germany, who led the eight-man final for the majority of time, had to settle for a bronze in 14:40.91.

Another pillar crumbles in UP BSP