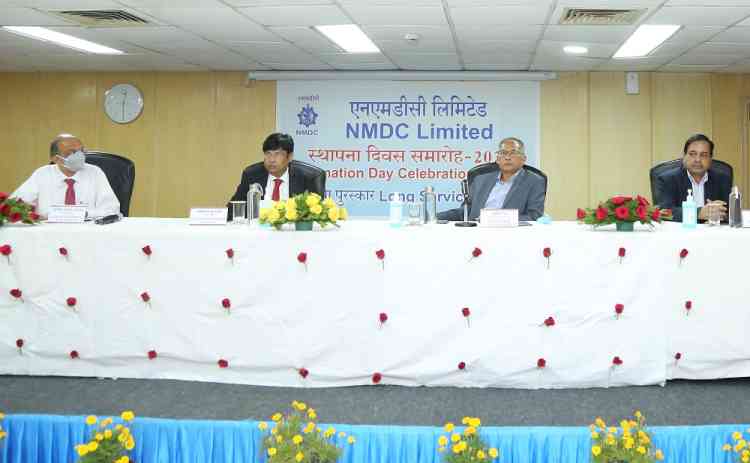 Hyderabad: NMDC celebrated its 63rd Formation Day at its Head Office - Hyderabad and at all locations of its major projects and units with great vigour and enthusiasm. NMDC, the largest iron ore producer in the country was incorporated on this day in 1958 and has completed 62 years of excellence. Shri Sumit Deb, CMD, NMDC inaugurated the programme in the presence of  functional directors of NMDC Shri P. K. Satpathy, Director – Production, Shri Amitava Mukharjee, Director – Finance, Shri Alok Kumar Mehta, Director – Commercial.

Congratulating the employees on this prestigious occasion Shri Sumit Deb, CMD, NMDC said, “Everyone associated with NMDC should take pride in its achievements and also be aware of the increased responsibilities it brings in terms of working towards the betterment of the society and nation as a whole. I am grateful to all of the NMDC family for the endless support and dedication you have towards your work”. Shri Deb added, “NMDC always encourages wholesome development and sports activities in and around its projects which are located in very remote areas in Chhattisgarh, Karnataka and Madhya Pradesh. PSEs like NMDC play an important role to encourage sports and games in the country. He made a special note on major milestones of NMDC in its 62 years of existence”.

As a part of NMDC’s established corporate culture, employees who have put in more than 20 years of continuous service were felicitated during the function with long service awards in recognition of their dedicated and long association with NMDC. These long service awards were presented by Shri Sumit Deb, Functional Directors and Project Heads at respective projects of NMDC.

NMDC conducted an online Painting competition on the theme COVID-19 and Chess tournament for children on Sunday, 15th November, 2020 as part of the Foundation celebrations. Around 800 students have participated in the competitions from Telangana and NMDC-sponsored and supported schools in Chhattisgarh, Karnataka and Madhya Pradesh.