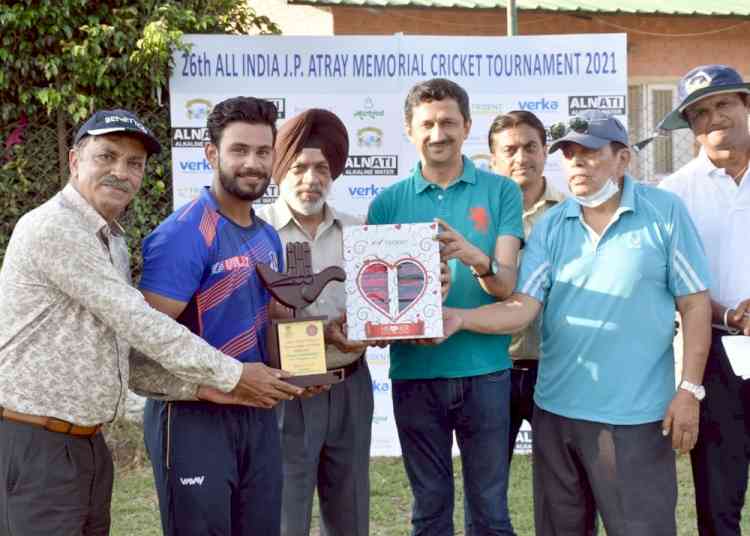 Trident Man of the match was given by Mr Vivek Atray, IAS, former Dy. Commissioner, Panchkula to Abhishek Goswami of UPCA.

PCC  vs Chhattisgarh , PCC won the match by 5 wickets

balls with 4 boundaries and 1 six.  For PCC Barinder Saran, Prerit Dutta and Krishan Alang scalped 2 wickets each while Gurnoor Brar and Sumit Sharma pitch forked with 1 each. Replying PCC opened with Abhijit Garg and Nehal Wadhera and the duo put on 33 runs in 7.2 overs before Abhijit Garg was caught by Chandrella off Sashank Singh for 4. Nehal Wadhera who had scored the highest score ever in the tournament continued with his good form as he negotiated spin and pace with great aplomb and put the Punjab innings on rails. He was unlucky to miss his converted century by 2 runs when he was trapped in front by Nitish Rao for a more than run a ball 98 off 95 balls embellished with 9 rousing boundaries and 4 lusty sixes. He was ably supported by Naman Dhir 35 off 54 balls with 1 boundary and 1 six. PCC scored 229 for 5 in 45.5 overs to win the match by 5 wickets and garner 4 points while CSCS drew a blank. Nehal Wadhera for his brilliant batting performance was given Trident man of the match by Gagandeep Singh and Devender Bhundela. Despite winning this match PCC could not move in the semifinal as they had lost to UPCA who later on won their match against RBI Mumbai. Both UPCA and PCC had recorded 2 wins each but PCC having lost to UPCA in earlier league encounter lagged behind on head to head count.

In the 2nd truncated match played at GMMS sector 26 UPCA defeated RBI Mumbai by 9 wickets to garner 4 points and secure a place in the semifinals the match which started at1 pm due to early morning rain was rescheduled to 26 overs a side match. UPCA won the toss and opted to field and restricted RBI Mumbai to 151 for 9 in 26 overs. Dhruv Shorey 52 off 50 balls with 4 boundaries and 3 sixes and Kuldeep Hooda 40 off 44 balls with 2 boundaries and 3 sixes were the main run getters. For UPCA Shivam Sharma 4 for 21 and Akshdeep Nath 2 for 7 were the main wicket takers.  Replying UPCA scored 152 for 1 in 22.3 overs to record a facile 9 wicket win. Opener Abhishek Goswami unbeaten 93 off 74 balls with 7 boundaries and 7 huge sixes was ably supported by Karan Sharma unbeaten 44 off 52 balls with 5 boundaries. For RBI Mumbai Ankit Rajput 1 for 31 was the only successful bowler. Mr. Vivek Atray gave away the Trident man of the match to Mr. Abhishek Goswami for his brilliant unbeaten knock of 93.

In the 3rd match between CAG Delhi and Baroda cricket Association at Mahajan Cricket Ground was abandoned due to wet playing conditions by the umpires at 1.40 pm. Both the teams were awarded 2 points each. CAG with earlier 2 wins moved into the semifinals.

After collection of solid evidence, 4 scribes will be arrested: J&K Police

Really enjoyed getting Virat, tying his team down: Sunil...