Their father, Bajirao Patil, harboured Olympic swimming dreams but when that didn’t go far he imbibed them into his daughters 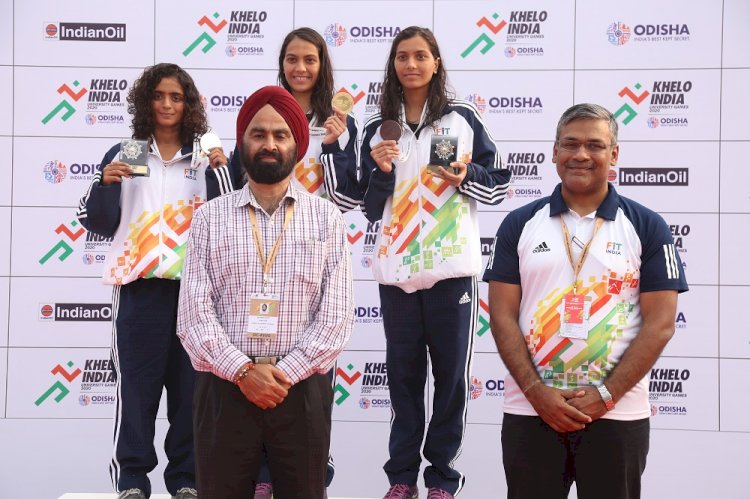 Bhubaneswar: It’s not just a passion for winning that University of Mumbai’s Jyoti and Aarti, who are setting the swimming pool here at the Khelo India University Games 2020 on fire, share.

They hang out together, pull pranks on each other and even enjoy the same kind of films.

No surprise there of course: they are identical twins.

Yes, Jyoti and Aarti Patel are best friends and training partners too; but they are also fierce competitors once they are out there in the water.

Their father, Bajirao Patil, harboured Olympic swimming dreams but when that didn’t go far he imbibed them into his daughters.

Inevitably, the duo was cast into the pool together… when they could not even walk.

“I believe we were just one year then,” Jyoti recalled. “At the age of four, we swam from the Gateway of India to Alibaug, setting a record for the fastest time by twins their age in the process.” Right then, it was clear that they were destined for something bigger.

On the opening day of the swimming events at the KIUG, the Patil twins grabbed four medals between them, and even ended up on the podium in the 200m breast-stroke, Jyoti winning gold and Aarti the bronze.

The duo also helped University of Mumbai to a bronze in the 4x200m freestyle relay.  With more events to come up, they want to take the pressure off and relax. And for that there is only one remedy: unwind with the kind of movie they like best. “Don’t tell anyone,” Jyoti laughed, “but our favourites are Tamil movies.”

Interestingly, training and family time is virtually the same thing for everybody in the house. “Even today it is a family outing,” Aarti added.

Jyoti has got a head-start over Aarti as far as Khelo India Games go. She not only took part in the second edition in Pune but also won gold in the 200m and silver in the 100m, both breast-stroke.

But for Aarti this is new. “I was hugely disappointed to have not made it for the Games in 2019. But in a way it was a blessing in disguise. Here I am now, at the inaugural edition of the Khelo India University Games 2020,” she laughed.

Between them, however, the twins have over a hundred medals over several events at the district, state and national level. They follow the dictate of their father, who is in the Mumbai Police force, when it comes to events.

“To tell you the truth, we have never ben coached to aim for medals or to win races,” Aarti revealed. “The idea is to put in your best every day and let success take care of itself.”

Gongutri of Assam returns from a road accident to win Road...