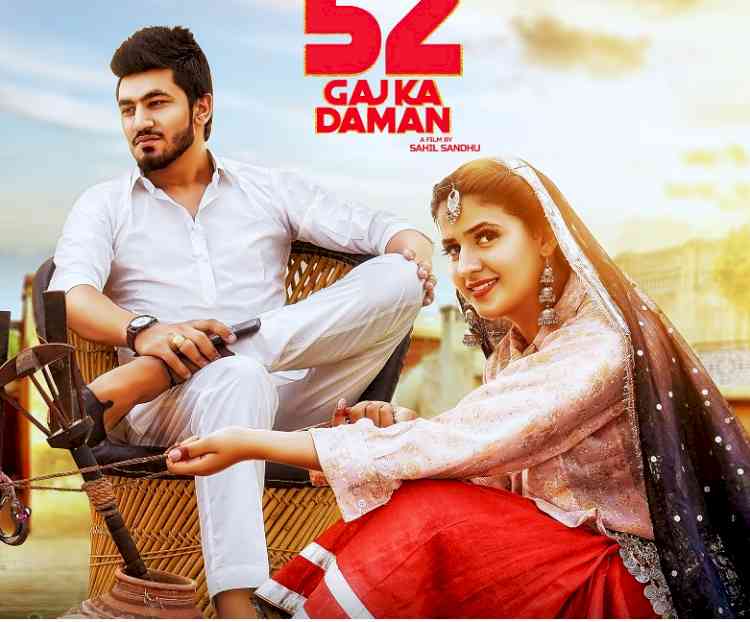 Mumbai: Desi Records’ song titled ’52 Gaj ka Daman’ has been receiving many accolades since its release in 2020 with its catchy Haryanvi beats.

Setting benchmark since its very first day, the song ‘52 Gaj ka Daman’ continued its record breaking spree by clocking in the highly coveted 1 Billion views mark on YouTube in just 255 days, becoming the fastest Indian track across all languages and genres to achieve this colossal feat. A remarkable achievement for a Non-film regional song, in the Regional (Haryanvi) segment.

‘52 Gaj ka Daman’ is song by 19-year-old Renuka Panwar, known for her euphonious voice in the Haryanvi industry. Composed by Aman Jaji, ‘52 Gaj ka Daman’ was released in October 2020, with the music video beautifully directed by Sahil Sandhu. The song features Pranjal Dahiya and Aman Jaji and the lyrics are penned by Mukesh Jaji.

‘52 Gaj ka Daman’, the song held the No. 1 position on YouTube Global charts for 12 consecutive weeks. It’s the most successful song on YouTube in Haryanvi and this breakout success in a regional genre makes 52 Gaj ka Daman an unbelievable hit!

Commenting on the occasion, Sanchit Goyal, Co-founder & Director, Desi Records said, “52 Gaj ka Daman has truly been a path-breaking song and it is heartening to see how music enthusiasts have showered so much love on a regional song and made it a huge success it is today. 52 Gaj ka Daman is the fastest Indian track to reach 1 billion across all languages and all genres in 255 days-A new record for a Haryanvi song under Desi Records. The very talented Renuka has beautifully sung the song and it gives us immense pleasure that at the age of 19 she has achieved such a record breaking success and accomplishment with Desi Records. It is indeed a huge milestone for everyone who has been a part of 52 Gaj ka Daman in its journey.”

Speaking on the success, Renuka Panwar said, "The response '52 Gaj ka Daman' received has been unprecedented. We are ecstatic that the song has managed to make an impact on such a big level with 1 Billion views, retaining Number 1 spot for 12 consecutive Weeks in the Global YouTube charts.  This wouldn't have been possible without the support of Desi Records. I also want to thank the entire team and my fans who made this song a Breakout success. I hope the song continues to break its musical streak and entertain all my Haryanvi music fans worldwide.”

Department should complete all formalities related to Central University construction...

Dhruva Karunakar to reprise the role of Mahatma Phule on...

Aladdin headed to a dangerous and an exciting journey