More equal world may be possible in next 20 or 30 years: social Advocate Nandita Das

She participated in a conversation with FLO members 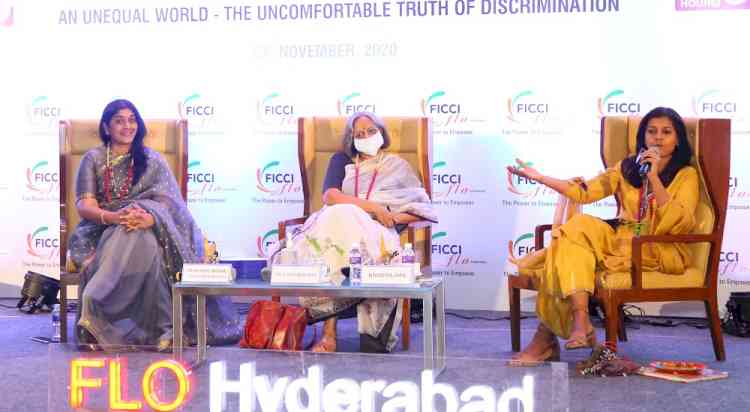 Usharani Manne, Dr. Rukmini Rao and Nandita Das at the interactive session on An Unequal World-The Uncomfortable Truth of Discrimination.

Hyderabad: The actress, activist Nandita Das addressed FLO members here in the city today at hotel The Park in a first in person meeting of FLO in last eight months.

Addressing a press conference prior to her session with FLO members, she said, “we are meeting in unusual times”. This is my first in person meeting after lockdown. Though I was initially not comfortable to travel but on Usha’s (FLO Chairperson), insistence I could make it. The difficult times also threw open many discriminations.

Explaining them, Nandita said exodus of migrant workers is one such discrimination. They were our guest workers, but see how they were treated by the society. The cities where they worked couldn’t take care of them. Instead we have caused outrage by spraying them with disinfectant, fearing that they might have been carriers of the Corona virus

Another discrimination the pandemic thrown open is domestic violence on women. The domestic abuse is on the rise not just here in our country but all over the world. Home is where peace is supposed to be prevailed but Work From Home lead to another public health crisis to the toll of the new coronavirus.

The mounting data indicates that domestic violence cases have gone up many folds since the outbreak of the virus.

Speaking about her connection to the city Nandita said I that she would use every possible opportunity to travel to the city. My last film Virataparvam was shot here. The people here are cordial, friendly. I like the food too.

After the press conference Nandita Das spoke to 100 members on "An Unequal World - The Uncomfortable Truth of Discrimination".  It was the first ground event of FLO post-lock down.

In conversation with Dr Rukmini Rao, city’s women’s rights activist, Nandita said we might see more equal world may be in next 20 or 30 years, but we must hasten that process.

Our constitution guarantees us equality. But that is just on paper and there is discrimination everywhere. Nandita shared her journey and highlighted few challenges, discriminations she faced.

I grew up with openness. I had so much of inclusivity at my home. Nobody ever talked about caste in our house. Caste doesn’t play any role in my life. When I say this I may be mistaken, in fact I was mistaken by many, which I realized later that it is normally behavior of the upper caste.

See these words ‘Upper Caste’ and ‘Lower Caste’. This is not correct. But unfortunately, there is no right word for that expression she said.

Nandita shared her Dark is Beautiful Campaign and India’s Got Colour.

The actress who acted in more than 40 films in ten languages too faced a lot of discrimination based on her skin color. She tired of being called dark and dusky. Like her many people suffered in silence. Then she took up a campaign fighting against colorism called India’s Got Colour.

The campaign was an attempt to end skin colour bias in India through workshops, counselling and information dissemination via mass media, she informed and screened a film too on the same.

When Dr Rukmini asked her views on the Tanishq Ad she said that nothing was wrong about it. I tried to counter objections raised by few lobbies through my tweets.

After pandemic the first casualty is going to be women. The representation of women folk in in our work force has come down to 27 to 23 % she said.

She asked audience and women at large to raise daughters with confidence. And teach the boys and men to be more humane. Grow up your children to be less discriminating Nandita told.

I refuse to agree to the saying ‘women are women’s greatest enemies”. There is no truth in it she said.

Welcoming the gathering Chairperson of FLO Hyderabad, Usharani Manne said today’s interaction with our illustrious guest Nandita Das, stemmed out of the need we felt to make discrimination a conversation agenda because human survival depends on the elimination of discriminatory practices. Why do we fear and recoil from those who we perceive as different from us? Isn’t this unfortunate and potentially dangerous for the human race as a whole?

Usharani Manne, Chairperson of FLO Hyderabad said, “as the world is embracing and mastering the new normal, FLO is looking forward to hosting our members for a ground event, our first after our virtual Change of Guard in May 2020. We will be adhering to strict Covid-protocols for the safety of our attendees.”

Proceeding the speaker session, a formal Change of Guard of the new FLO team headed by Usharani Manne, Chairperson, was conducted. The virtual change of guard took place in May. Since then FLO has been organizing all the meetings virtually.