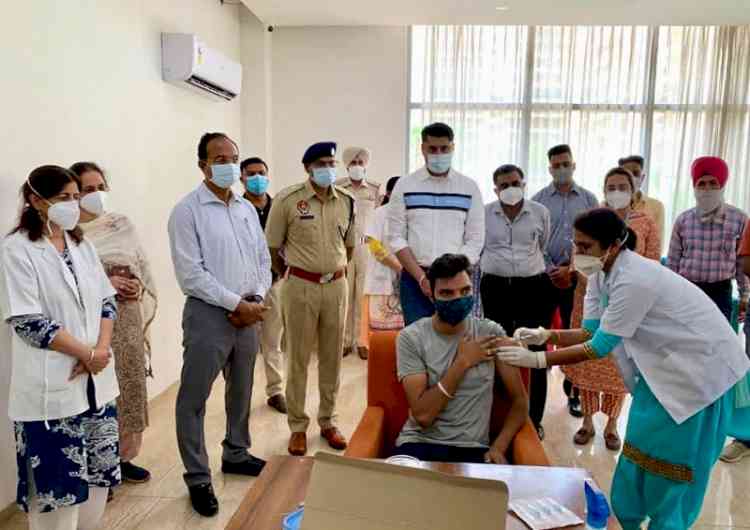 Ludhiana: Kick-starting the third and most important phase of administrating Covid vaccine to the people in (18-44 age group), Gill MLA Kuldeep Singh Vaid, Punjab Youth Development Board chairman Sukhwinder Singh Bindra and Deputy Commissioner Varinder Kumar Sharma on Monday said that this inoculation drive is only way to fight and overcome this virus at the earliest.

Accompanied Joint Commissioner of Police J Elanchezhian, Civil Surgeon Dr Kiran Ahluwalia Gill, they said that the construction workers have been included into high-risk category and would be give jab as priority group.

They told that the vaccine will give them shield against the contagion and even if they contract the infection due to their greater interaction job, it would be mild.

They added that the vaccine works like helmet ass it saves the biker from any head injury, a major cause behind deaths in road mishaps, similarly vaccine will prevent severity.

They said that the countries where the people have wholeheartedly supported the vaccination program and half of their population have received the shot of vaccine are witnesses very few cases of Covid so that people of Ludhiana need to come forward and get the vaccine into the arms.

PYDB Chairman Sukhwinder Singh Bindra said that the board has already organised 33 vaccination camps in the state and appealed the youth to get themselves vaccinated in the interest of society.

They once again appealed to the people to join hands with the administration to contain the pandemic as soon as possible by receiving the vaccine in large numbers in nearby government/private health institutions.

They informed that Ludhiana has 25000 registered construction workers and would be covered aggressively.

Screening of 31663 persons done during door to door survey...