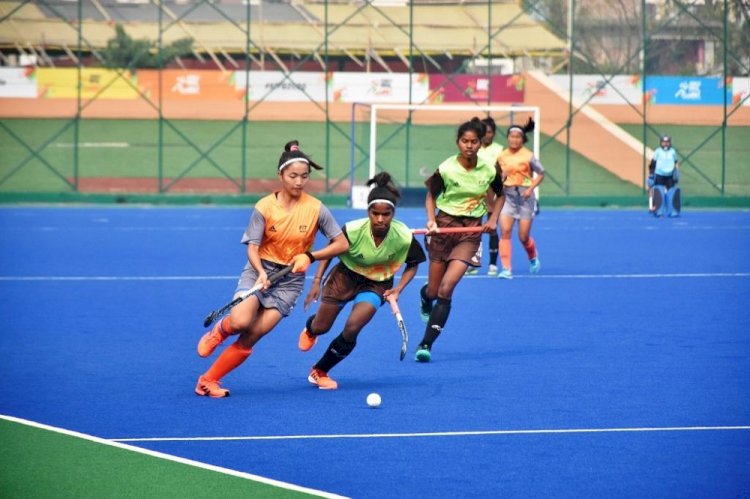 Lalrindiki (orange) in action for Mizoram at the Khelo India Youth Games.

Guwahati: Mizoram and Jharkhand's rise in women's hockey in recent years has been a wonderful story and both teams have been producing some fantastic players, and Sunday's semi-final match of the U-21 Girls category in the Khelo India Youth Games 2020, was a perfect exhibition of the level that the two states have reached. A nerve-wrecking, high-scoring encounter saw Jharkhand come out on top after winning 4-3 in the penalty shootout, but it was the spirit shown by both teams which won the hearts of the crowd present here at the Maulana Md. Tayabullah Hockey Stadium.

Mizoram's rise can be credited to Indian Senior Women's Hockey team's forward Lalremsiami, who became the first-ever hockey player from the state to represent the team when she made her debut in 2018. The 19-year-old player has since inspired many girls to take up the sport, including the likes of Lalrindiki and Marina Lalramnghaki, who are core members of the Indian Junior Women's Hockey Team. "I am happy to see so many girls taking up the sport now, and it is also because of the facilities we have now in the SAI Hostel in Aizawl. The players have certainly benefited from the facilities. When I had started playing, there was not even a single turf in our state, but slowly we are getting to a good level. The girls are very talented and I am happy that they look up to me," said Lalremsiami, who is currently in the National Camp in Bengaluru with the Senior team.

Whereas, Jharkhand on the other hand, have only produced a few hockey players who have gone on to represent the country. Most recently, it has been Indian midfielder Nikki Pradhan, who has also managed to inspire the next generation of women players. "I feel that players from Jharkhand have the ability to play at the highest level, and through competitions like the Khelo India Youth Games, these players will learn a lot. We have been able to get some more facilities into place in our state, and that is why we have been performing well in the domestic circuit recently," said Nikki, who is also in the National Camp.

Meanwhile Mizoram's coach Lalrothuami, unable to hide her disappointment with her team's loss on Sunday, said that the fact that three Junior players from the state are in the junior national camp proves things are improving. "I think Lalremsiami's rise to the national team at such a young age inspired many young athletes. There is always football first for many of our children, but slowly hockey is also garnering attention which is good to see. Competitions like the Khelo India Youth Games also provide a huge opportunity for the players to experience good competitive environment, and I'm sure they will be helped a lot," she said.

For Sangita Kumari, who was a constant threat to Mizoram in their semi-final encounter, it is about making it to the biggest stage and winning something for the country. "I think the reason why someone would choose to play a sport is because they are inspired by a person very similar to them who has done something big for their country. It is something that I want to do for my country as well, and the moment I win something big, young girls in my state and country will actually look up to me and take up the sport. Nikki didi's achievements have inspired all of us to take up hockey and win something big," said the young forward.

The exciting semi-final match saw Mizoram take a 3-0 lead through Lalneihpuii's hat-trick inside the opening 40 minutes of the match, but constant pressure from Jharkhand helped them in scoring three goals inside the last nine minutes to take the match into a penalty shootout. Jharkhand's Anjna Dungdung, Reshma Soreng and Sangita Kumari scored the crucial goals. In the penalty shootout, Mizoram missed their first shot, while Jharkhand converted their first three shots. However, trailing by 3-2, it was Mizoram's goalkeeper Ramsangliani who displayed nerves of steel to save the next two shots, to take the tie into a sudden death.

Both the teams missed their first shots in the sudden death, but Jharkhand's Albela Rani Toppo produced a stunning, fierce finish to put her side ahead. Indian Junior international, Lalrindiki, who was superb for Mizoram throughout the match and had converted her first shot in the shootout, stepped up to take the deciding execution, but could not beat Jharkhand's Anjali Binjhia, meaning that Jharkhand snatched a memorable win to progress to the Final of the competition.

Please find below the results from today: