Main aim of this visit was to find out problems being faced by residents on ground: Varinder Sharma 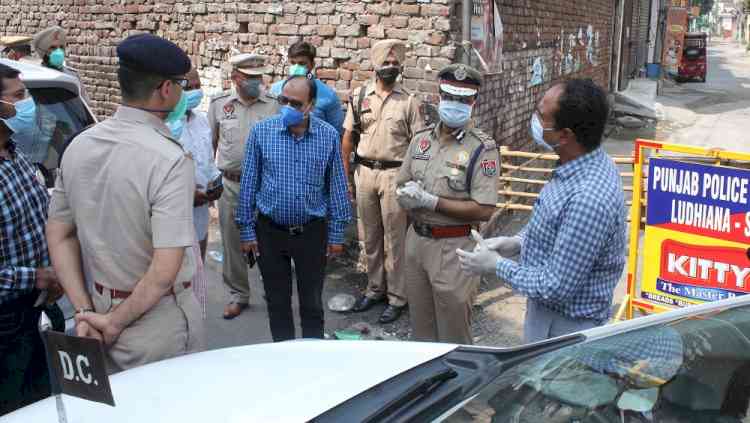 Ludhiana: Deputy Commissioner Mr Varinder Sharma, Commissioner of Police Mr Rakesh Kumar Agrawal and other senior district and police administration officials today took a round of the containment zones declared in the city. They not only interacted with the residents, but also distributed masks amongst them.
The main aim of this visit was to find out the problems being faced by the residents living in containment and micro-containment zones. They were also accompanied by Civil Surgeon Dr Rajesh Kumar Bagga, ADCP Mr Deepak Pareek, besides several others.
Deputy Commissioner Mr Varinder Sharma have assured the residents living in containment as well as micro-containment zones that all facilities would be provided to them. He also urged them to assist the health department in taking samples of their family members as it is being done for their own safety. He said that there were some complaints that people in some areas have been refusing to give samples, but such people should understand that the health department staff has been working tirelessly away from their own families simply to ensure the safety and well being of residents. He also clarified that the samples are being collected totally free of cost.
The Deputy Commissioner informed that there are three containment and nine micro containment zones in the city and the perimeter control of these areas have been done strictly. He urged the residents to always wear a mask, maintain physical distancing and maintain hand hygiene. He also urged them not to attend social functions that can be avoided as the number of positive cases have increased in the state in last few days.
He further informed that as per the latest directions of the Punjab government, now gathering of only 30 persons is allowed in a wedding, 20 persons at cremation and section 144 of CrPC has been imposed in the district, which means not more than 5 persons can gather at any place. He said that Mission Fateh of the Punjab government cannot be successful without public participation.
Commissioner of Police Mr Rakesh Kumar Verma urged the residents to follow all government directions strictly as they have been formulated for the safety of residents. He warned of strict action against any violations.

Faizan Ansari - Handsome dude with a large heart, all set for Bollywood

Punjabi poet Darshan Khatkar to be honoured with Harbhajan...

Kalia demands action against officers of Food and Supply...