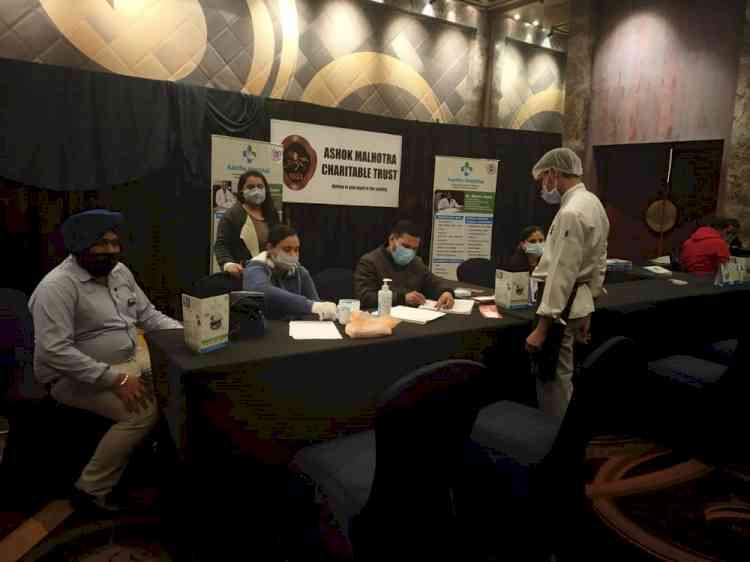 It was with the vision of the Founder of MBD Group, Shri Ashok Kumar Malhotra, that MBD Group from being an education conglomerate decided to enter hospitality sector in year 2003 and launched “Radisson Blu MBD Hotel”, the first five-star luxury hotel of Noida in 2003 and further changed the hospitality landscape of Punjab by launch Ludhiana’s first five star luxury hotel “Radisson Blu Hotel MBD Ludhiana “ in  2012 . Shri Ashok Kumar Malhotra wanted to give the best of hospitality to Punjab because that’s where he belonged and started his entrepreneurial journey from. In these 9 years hotel has continued to evolve to provide bespoke luxury, impeccable service and elevating the guests’ experiences in all aspects.

On the occasion, Mrs. Satish Bala Malhotra, Chairperson,  MBD Group said, “This is an exciting moment for all of us at  MBD group. I believe that the achievement of any organization is the result of the combined effort of every individual. Therefore, I would like to congratulate each and every employee, stakeholders who have contributed to the successful completion of nine great years of the hotel”. She further said that we put our MBD team members as our first priority always and keeping the  current situation in mind on the 9 th anniversary of the hotel , We organized medical checkup camp for all our employees in Ludhiana under the aegis of Ashok Malhotra Charitable Trust.


Commenting on the special occasion, Ms. Sonica Malhotra Kandhari, Joint Managing Director,  MBD Group said, “It is a momentous occasion for all of us at  MBD Group that the hotel has completed nine years of providing finest hospitality and services to its patrons. Radisson Blu Hotel MBD Ludhiana is committed to offer the best experience to its guests and always strives to curate luxuriously meaningful experiences and innovative craftsmanship. And, this milestone of completing nine successful years in the business is a testament of the same. All this has been possible because of the vision of our founder father, Shri Ashok Kumar Malhotra to provide the first luxury five star  hotel of Ludhiana  and change the hospitality landscape of the city " she further added


Further to this she added, “On this occasion, I would like to thank to all employees for their immense hard work, dedication and commitment for delivering impeccable services and hope that the hotel continues to set new benchmarks in the hospitality sector in the years to come”.

Ms. Monica Malhotra Kandhari, MD,  MBD group said,” This is indeed a proud moment for all of us to celebrate the ninth anniversary of the hotel. Over these years, the hotel has been successful in offering the best quality service and hospitality to its guests and contributed to the growth of the hospitality sector in India. We look forward to many more successful years of the hotel with the help and support of our people and following our father Shri Ashok Kumar Malhotra Ji’s footsteps”.

After the successful launch of its maiden hospitality venture Radisson Blu Hotel MBD Noida, the Group replicated its success by venturing into Ludhiana and launching the first five star hotel in the city Radisson Blu Hotel MBD Ludhiana in 2012. Since opening its doors, Radisson Blu Hotel  MBD Ludhiana paved the way for the new standard of hospitality in Punjab. In these 9 years, the hotel has not only showcased the transformation efforts but also reinstated Group’s commitment to contribute in the growth of the hospitality segment in India. Specializing in wedding planning and marriage preparations, the hotel has set a high benchmark for others to emulate. The hotel is known for its exquisite interiors, impeccable services & fine cuisines and is located at the heart of the city. Strategically located, adjacent to  MBD Neopolis Mall, this upscale hotel is only 9.1 kms away from Ludhiana Railway Station and caters to business and leisure travellers, ensuring a comfortable and memorable stay for all