MC contractors who have either delayed projects or have failed to start development projects to be blacklisted: Ashu 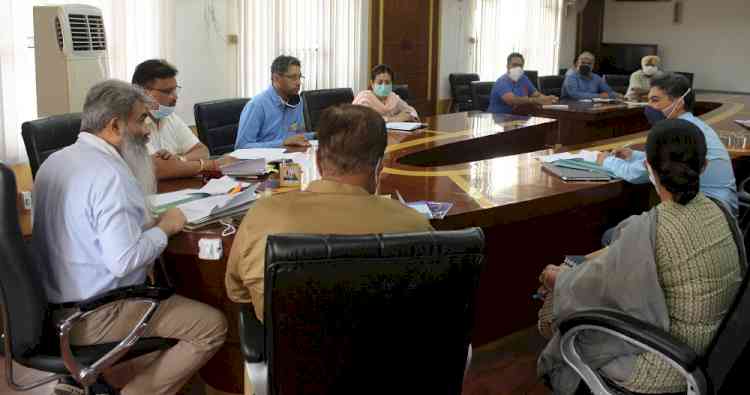 Ludhiana:    Punjab Food, Civil Supplies & Consumer Affairs Minister Mr Bharat Bhushan Ashu today said that the Municipal Corporation contractors who have either delayed the development projects or have failed to start the projects despite work orders being issued to them, would be blacklisted. He said that due to delay in the execution of the projects, it is the residents who are suffering and no laxity would be tolerated in terms of quality or speed of the development projects.
Mr Ashu said this while chairing a review meeting regarding development projects at MC Zone D office in Sarabha Nagar, here today. He was also accompanied by Mayor Mr Balkar Singh Sandhu, MC Councillor Mrs Mamta Ashu, MC Commissioner Mr Pardeep Kumar Sabharwal, MC Additional Commissioners Mr Sanyam Aggarwal and Mr Rishi Pal Singh, besides several others.
He said that some of the MC contractors are taking the MC for granted and strict action would now be taken against them. He said that under the Mission Fateh, the Capt Amarinder Singh led Punjab government is committed for carrying out overall development of Ludhiana and that is why, several development projects worth crores have been started in the city. He also asked the officials to submit Utilisation Certificates of the completed works with the government so that more works could be sought. He said that no funds should be left unused and every single penny should be spent for the welfare of residents.
During today’s meeting, the Cabinet Minister reviewed the development projects related to Ludhiana Smart City Ltd, Operations and Maintenance Cell, Horticulture Branch, Health Branch, recoveries etc.
He said that the next payment related to the LED streetlights project would be made to the contractor only when the contractor explains about the energy saving in detail. He directed the MC officials to impose a penalty to the Tata Sons (contractor) for all non functional streetlights without fail. He also appreciated the MC officials for getting GPS installed in all of its vehicles through CSR, that would help in better monitoring.
He directed the horticulture branch officials to ensure that the Leisure Valley in Sarabha Nagar should be maintained properly and said that he would personally visit the project next week. He also directed them to ensure that Park Management Committees are formed for all the parks of city.
MC Commissioner Mr Pardeep Kumar Sabharwal informed that this month, there has been a lot of improvement in the recoveries. He said that Rs 5 crore have been recovered as property tax, Rs 3.92 crore from water supply, Rs 3.32 crore as composition fee, Rs 23 lakh as building fee, besides others. He said that targets have been assigned to the officials for maximum recovery so that these funds can be spent on the development of city. He also informed that a monitoring cell has been set up in the civic body that is taking samples of all ongoing projects and getting them tested from the laboratory at Guru Nanak Dev Engineering College, here.
Later, Mr Ashu, accompanied by all senior officials also visited the Sidhwan Canal Waterfront project and Leisure Valley in BRS Nagar and issued instructions to the staff.