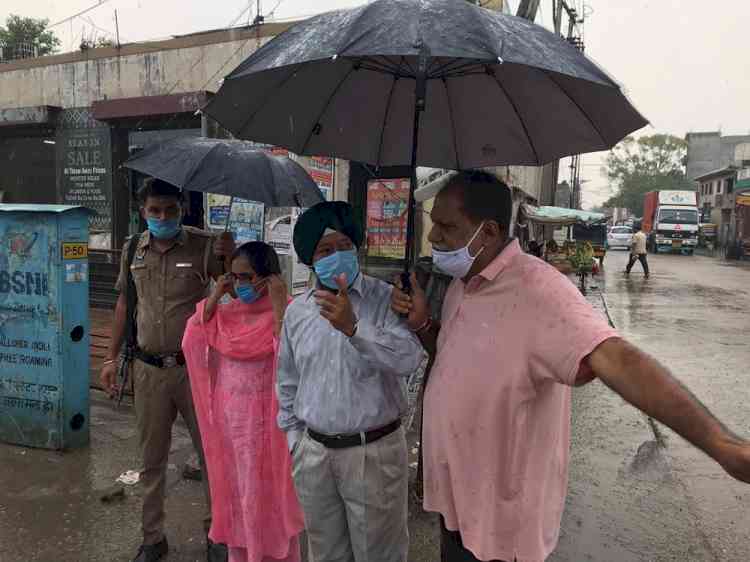 Ludhiana: Mayor Mr Balkar Singh Sandhu and on behalf of Punjab Food, Civil Supplies and Consumer Affairs Minister Mr Bharat Bhushan Ashu, his wife and MC Councillor Mrs Mamta Ashu today visited the site near Sherpur Chowk on main GT Road, here. They also interacted with the officials of National Highways Authority of India (NHAI) and directed them to ensure that there is no water accumulation on the road.

Mayor Mr Balkar Singh Sandhu informed that he has also written a letter to the NHAI officials directing them to ensure there is no water accumulation on all sites where their projects are going on at present. He said that the NHAI officials were also directed to ensure that there is proper disposal of rain water at not only this site but all other sites.

Mrs Mamta Ashu informed that there were several complaints of water accumulation near SPS Hospital near Sherpur Chowk on GT Road, here, that was not only causing inconvenience to the public, but can also lead to road accidents, besides damaging the roads leading to loss of public exchequer. She pulled up the NHAI officials for their failure to put a proper mechanism in place to redress this problem.

Mayor Mr Sandhu stated that if this issue is not checked now, it might lead to bigger problems in the future and stated that redressing all problems of the residents is their foremost priority.

Times might be tough, keep dreams alive, tomorrow is waiting

Administration to set up 100 level-II covid beds in Jawaddi...

About 1,94,528 persons diagnosed with hypertension put...