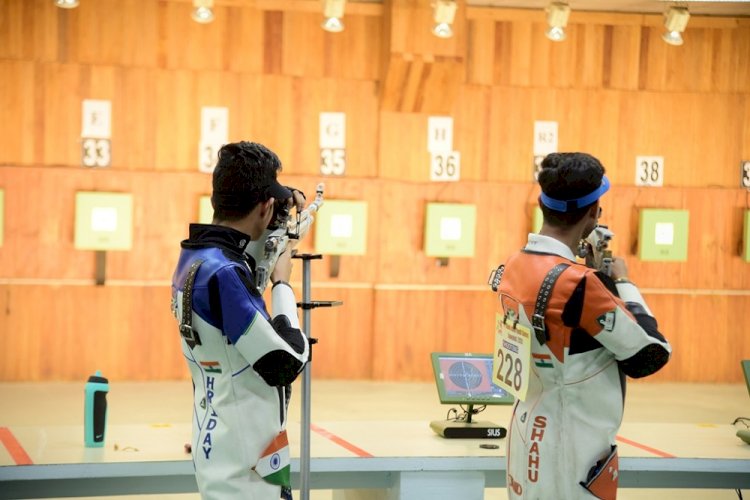 "Abhinav Sir has won an Olympic gold in shooting, so my dream is to win two for the country," Rudraksh revealed his dream, without really sounding bombastic.

He underlined his ability to single-mindedly focus on his goal by following the instructions of his coach to the last dot.

“My coach had told me not to think of the medal at all, to strictly not look at the scoreboard. It was not easy but I did just that and I guess that’s why I have succeeded,” an assured Rudraksh said, flashing a smile as he finally looked at the scoreboard that reflected a high score of 252.4.

Maharashtra clinched a second medal in the 10m air rifle gold, with Shahu Tushar Mane taking the bronze in the Boys’ U-21 category.

Shahu was expectedly disappointed for missing out on the gold.

"It's disappointing that I didn't win the gold, but in the final analysis, it's fine. Especially as my performance in the finals was pretty good. I have had a nice run in the Khelo Games, winning the gold in the first edition of the competition and a bronze now," Shahu explained.

Like most of India’s talented sportspersons, 18-year-old Mane’s parents too were alarmed about his career choice, especially as they didn’t know if they could provide him the expensive equipment and ammunition.

"I took up shooting just as a hobby, at the age of 14. My parents, who work at a medical store, were worried even though I hadn’t even thought of taking up shooting as a career at that point,” Shahu laughed.

“But when I won the gold in the 2017 Youth Nationals, they were ecstatic and have been whole-heartedly supporting me since then," he added.

He doesn’t have those concerns any longer, with Go Sports sponsoring him now.

Both Rudrakh and Shahu are delighted at the progress made by Maharashtra, after a slump in the last few years.

"Maharashtra is making a comeback in shooting. We are winning medals again and that is great,” Rudraksh said.

When asked about his biggest inspirations, Shahu did not hesitate to name his coach Suma Shirur, a Commonwealth Games gold medallist.

"My biggest inspirations have been Suma Shirur and Niccolo Campriani. Suma ma'am cares a lot for all her students. I have been training with her for the last three years. She is like my second mother," Shahu said.

Saran of Tamil Nadu converts bronze into gold with final jump of 7.41m