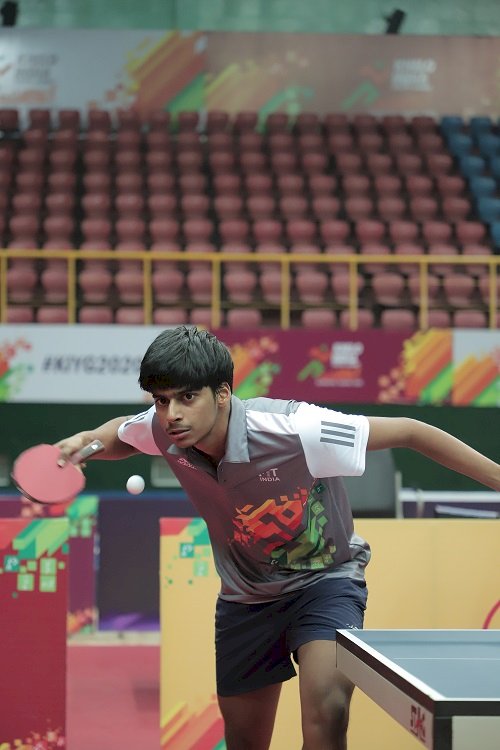 Guwahati: Much to Maharashtra’s chagrin and amusement, Telangana’s Fidel Suravajjula and Mizoram’s Jeho Puingheta & Alberto Ruata walked away with all the accolades from the TT arena in the Khelo India Youth Games.

As expected, Maharashtra finished on top with 2 gold, 4 silver and 1 bronze as the action finished at the DTRP, Nehru Stadium; Delhi (1G, 2S, 1B), West Bengal (1, 1, 1) and Tamil Nadu (1, 0, 2) too underscored their prowess, to save the blushes for the sport’s powerhouses.

But Telangana’s Fidel turned out to be the real hero on the last day, overcoming favourite Raegan Albuquerque (Maharashtra) in the Boys Under 21 singles finals; a day earlier, the Mizo pair of Jeho and Alberto cornered the honours, trouncing their Delhi counterparts in the Under-17 doubles finals to the surprise of aficionados.

Fidel felt his nerves as he took on Raegan, racing to a 5-0 and then 8-4 lead before capitulating 9-11 in the opening game.

“I got flustered. It was a great start, but I don’t know what happened,” he explained later. “After that, my coach and I had a little chat and we decided to change the pace of my play.”

The strategy worked like magic, Fidel winning the next two games at 12-10; he lost the next but held his composure to capture the gold, a first for Telangana in TT, winning 4-2.

“It feels great to be the first in something,” the Osmania University student laughed. With a gold at the Youth Games locked up, he is now looking forward first to the Senior Nationals in his home in Hyderabad, before donning the Telangana kit again in the Khelo India University Games in Bhubaneswar next month.

“I am very excited about that too. Our team has already qualified for the University games and they will pose a different type of challenge,” he said.

The Mizoram heroes were conspicuously missing from the table tennis arena on Tuesday; but it didn’t long to hunt them down: they were not too far away, watching football.

“Erm, yea obviously we are football fans, we are from Mizoram. Football is in our blood," he said. "Jeje Lalpheklua, Lallianzuala Chhangte are not just local heroes there but legends.”

They hope that their names will be added to that list. Puingheta’s father was a footballer himself and pushed his son towards sport at an early age. The youngster wasn’t too keen on highly physical contact sports though and picked TT. Almost immediately he excelled.

His partner’s story is the diametric opposite. Alberto Ruata’s father is a pastor, and a keen TT player. So when it came to picking sport, the choice was simple.

The two of them met each other often at state tournaments, before finally being drafted by PSPB into the TT team. “That’s when we started playing doubles,” Ruata said. Now the duo train at the Pinnacle TT Academy in Sonepat, and will head back straight into training for the Nationals.

Even as new states were making their marks, it was still the traditional bastions that held sway.

In the Girls U17 singles, Diya Chatale and Swastika Ghosh locked up the gold and the bronze for Maharashtra; Delhi’s lone gold medallist was Adarsh Chhetri, who clinched the Boys U17 title.