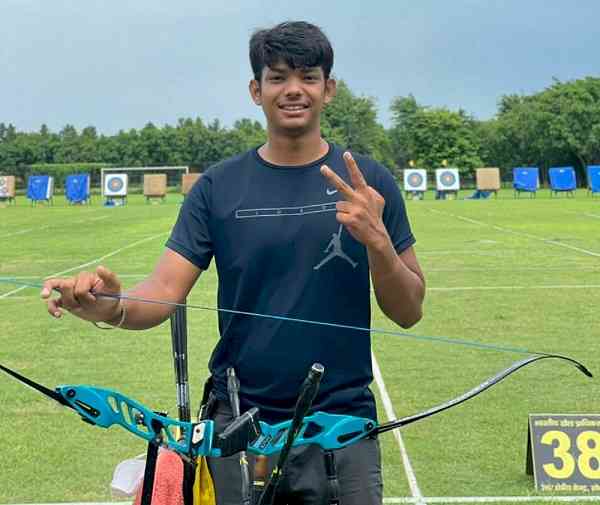 Jalandhar, September 17, 2021: One more promising student of BA Class at Lovely Professional University (LPU) has now been selected for ‘ Senior World Archery Championship to be held in the USA from 19-26th September, 2021. He is an important part of India’s new-look team for world archery championships is expected to won laurels for the country. Aditya was also a part of the Under 21 Men’s “Re-Curve” team of India that lately won ‘Gold’ medal in World Archery Youth Championships held in Wroclaw, Poland. Highlighting, none of the stalwarts and Olympians of India could qualify for this championship this time. Winning from here, Aditya can further go ahead for World Archery Championship to be organized consecutively, later on.
Selected Indian contingent, comprising six re-curve and six compound archers, has an average age of less than 20 years, and to compete in 10 events at the championships. Along with two other team members, Parth Salunke and Atul Verma; Aditya is part of India’s “Re-curve” Men’s team. Such a team uses “re-curve” bow, which is a modern evolution of traditional bows. Limbs of such bows are positioned at the top and bottom of the bow curve back away from the archer at each tip.
Congratulating the skillful archer, LPU Chancellor Mr Ashok Mittal shared: “It's a very promising sign that the very young persons of the university and the country firmly believe in their abilities in diverse fields. They are indeed the real future of dynamic India." In fact, world-class infrastructure, quality sports equipment, and experienced trainers enable LPU attract India's top sporting enthusiasts like Javelin-icon Neeraj Chopra and many other Olympic stars. LPU is indeed contributing much to India's academic, industry, cultural, sporting and allied scenarios.
With more than 160 national member associations, World Archery is the international federation for the Olympic and Paralympic sport of archery, and is responsible for regulating and promoting archery around the world. It envisions a world in which everyone has the opportunity to practice, engage with and enjoy the sport of archery. In fact, World Archery’s values include-precision, intensity, innovation, heritage, fair play, and sport for all. This participation is certain to uplift the aura of young Aditya of LPU.

No abetment conviction without positive act to instigate/aid suicide: SC

Webinar on “World Ozone Day: Keeping Us, Our Food and Vaccines Cool”

Sheru Classic sets up battle of brawns as over 300 men...

Punjab Kings made the right choice by picking Bishnoi:...