Like Chandigarh, Ferozepur gets a selfie point I Love Ferozepur

On the eve of New Year, MLA inaugurates the new selfie point, called upon the youth to express their love for the city 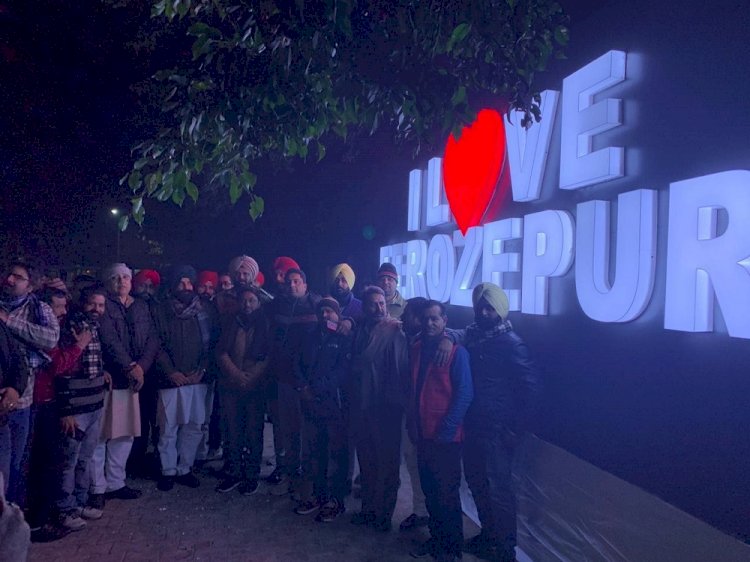 Ferozepur: Just like state capital Chandigarh, Ferozepur city on Wednesday night get a selfie point as the replica of the same has been inaugurated by the MLA Parminder Singh Pinki. Amid the colorful lights, the selfie point `I Love Ferozepur’ has emerged as a point of attraction in the city overnight.
Divulging more, MLA Parminder Singh Pinki said that the selfie point has been set up outside the Municipal Council Park, where a large number of visitors witnessing this unique initiative adding he said that this will make visitors feel like Chandigarh as there were a similar selfie point `I Love Chandigarh’ is already quite popular among people. He further added that people from Ferozepur who used to visit Chandigarh are familiar with that selfie point, would now feel the same craziness in Ferozepur too.
The MLA said that it was not just a selfie point because it was a platform for the people to come forward and express their love for Ferozepur. It will encourage people to eradicate social evils such as drugs abuse besides instilling a responsible attitude towards cleanliness. The MLA said that Ferozepur is no longer a backward area as it was on the pinnacle of multiple development projects and the advent of PGI Satellite center is one of them. He said that with the execution of various development projects Ferozepur city was going to be among one of the top class cities of Punjab. On the occasion, EO Municipal Council Parminder Singh Sukhija,  SDO S.S. Behal and others were present.