Lakhimpur unrest: 95 protesters detained outside UP Bhavan in Delhi 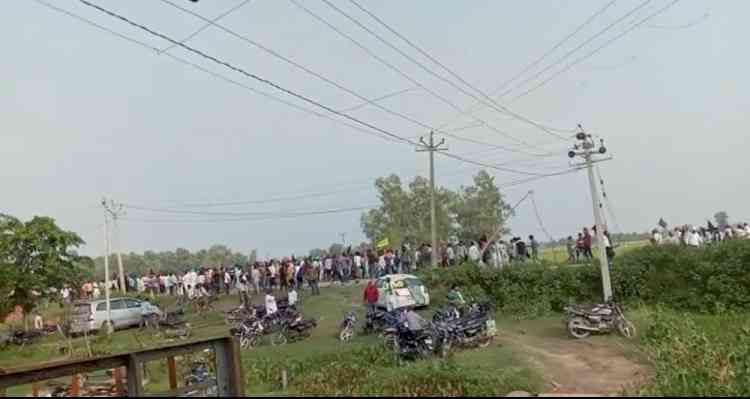 New Delhi, Oct 4 (IANS) Delhi Police has detained 95 protesters, including 25 women, near the Uttar Pradesh Bhavan in the national capital for staging a protest in the wake of Sunday's Lakhimpur incident which claimed the lives of eight people.

Deputy Commissioner of Police (New Delhi district) Deepak Yadav said that the protesters were given repeated warnings regarding the imposition of Section 144 in the area and DDMA guidelines.

"However, when they did not leave the area, they were detained and taken to the Mandir Marg Police Station," the DCP informed.

A total of 95 members from eight political parties were detained by the police which included 27 from Indian National Congress, 17 from Janvadi Mahila Samiti and Krantikari Yuva Sangthan each, 15 from Students' Federation of India, 13 from Rashtriya Lok Dal, 11 from All India Students Association, eight from Samajwadi Party and six from All India Kisan Sabha.

The agitation was carried out in the wake of violence at a farmers' protest in Uttar Pradesh's Lakhimpur-Kheri that left at least eight people dead and 15 others injured. The protest took a violent turn, there, as unidentified persons opened fire at the farmers on Sunday. Infuriated farmers then set three jeeps on fire after which some of the protesters were run over by the vehicles. One of the vehicles is said to belong to Ashish Mishra, son of Union Minister of State for Home Ajay Mishra.

Since Sunday, the incident became a political hotspot with leaders from the opposition parties targeting the ruling Uttar Pradesh government.

Hundreds of members of Opposition parties staged protests outside Uttar Pradesh Bhawan between 12 p.m. and 2 p.m., here, amid a heavy police deployment. The party workers demanded the sacking of Union MoS Ajay Mishra and the arrest of his son in connection with the death of farmers.

The senior police official said that appropriate legal action is being taken against all the people who were detained today.

Organ donation is the noblest among all donations: Vice...