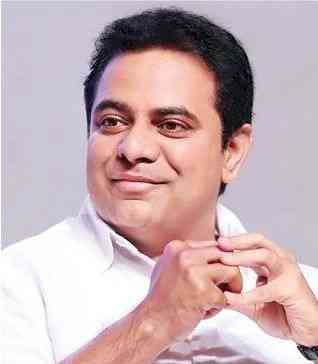 Hyderabad, Sep 1 (IANS) Telangana's cabinet minister K.T. Rama Rao, who is one of the most popular politicians in the country on social media, has crossed three million followers on Twitter.

The minister, who is popularly known by his initials KTR, is son of Chief Minister K. Chandrasekhar Rao and working president of Telangana Rashtra Samithi (TRS).

The 45-year-old added more followers during the Covid-19 pandemic when he responded to almost every tweet seeking help. Be it the lockdown last year or the second wave this year, KTR was the single point contact over social media for those in distress.

Whether it was a request for transportation during lockdown or healthcare emergencies like requirement of hospital beds, medicines or oxygen concentrators, the minister promptly responded to all by redirecting them to his office.

KTR has always been just a tweet away for citizens seeking help, and during the pandemic his office was busy attending to numerous calls from people in distress.

Since he holds many portfolios, netizens approach him with requests or grievances pertaining to different departments. Twitter users also reach out to him with requests on behalf of the poor and needy who have no access to social media.

One of the most active politicians on Twitter, the TRS leader also occasionally interacts with his followers, responding to their questions on various issues.

Known for his wit and humour, KTR is fluent in English, Telugu, Hindi and Urdu.

Popular among techies and students alike, he always tweets to encourage youngsters for their achievements and innovations.

BSF seizes drugs worth Rs 6 cr, one held in Mizoram

Surgical strike is answer to those who oppose CAA: C.T....