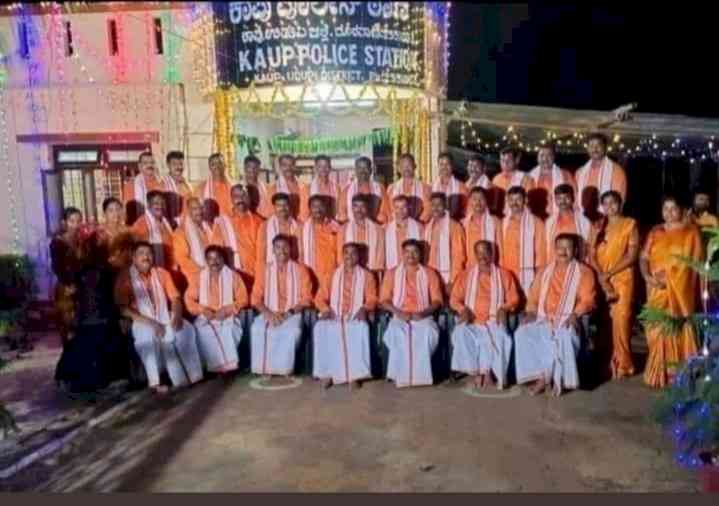 Bengaluru, Oct 18 (IANS) Photographs of the entire staff of Kapu police station in Udupi district and Vijayapura Rural district in Karnataka clad in saffron attire during Dasara celebrations, have gone viral on social media. The matter has also put the opposition Congress and ruling BJP in a confrontational mode.

As soon as the photos went viral, the posts generated a heated debate. Siddaramaiah, the opposition leader, attacked the ruling BJP and the Chief Minister Basavaraj Bommai.

"Why don't you distribute 'trishuls' (sacred weapons used by Hindu gods and goddesses) to cops? You have only changed their attire, if you could distribute trishuls, your dream of bringing 'jungle raj' in Karnataka will be realised," he chided the ruling BJP and Bommai.

He said that on one hand innocent young men and women are attacked in the name of moral policing in the state. On the other hand BJP legislators barged inside a police station to get the accused in a moral policing case released. "Furthermore Hindu outfits are distributing trishuls and openly giving calls for violence and all developments are well supported by the ruling BJP in the state. Is there governance," Siddaramaiah questioned.

Siddaramaiah said, "Since Chief Minister Bommai equated moral policing to 'action and reaction' and defended it, it seems the police department while heeding to this sign from Bommai have all set to enforce jungle raj in the state, burying the laws of the land. The people of the state should lock themselves up in their homes and it is not safe for them to venture out".

Reacting to this, BJP MLA from Udupi, Raghupathi Bhat questioned Siddaramaiah as to why he was so scared about saffron. He warned Siddaramaiah that if he opposes saffron then he is going to be further sidelined. Saffron stands for sacrifice. "We have worshipped saffron since times immemorial in this country," he said.

"Siddaramaiah is saying this to appease minorities and trying to symbolise saffron with violence. While he opposed police cladding saffron during the festival, he wore Tipu Sultan's hat and held a sword, then he did not realise unity and integrity. What would be his problem if police wore saffron," he questioned.

"The Congress party is in a pathetic state as it is opposing saffron...Our national flag has saffron colour. Wearing saffron robes is not an act of crime. Siddaramaiah had revealed his mindset by his attacks. Trishul is not a murder weapon, it is worshipped. In that case, police should be given trishuls. Actually Siddaramaiah had come up with a good idea," he chided.

The photos of the Hindu outfits distributing trishuls to activists on the occasion of 'Vijayadashami' in Dakshina Kannada have also gone viral. Mangaluru police Commissioner N. Shashikumar said the police department would look into the case. The Hindu leaders have clarified that trishuls are being distributed every year during the festival and the weapons are not sharp edged. They are blunt and distributed to activists as a part of traditions.

TSMC to start producing chips based on 3nm process in 2022: Report

Seven killed as private bus rolled down to deep gorge in...