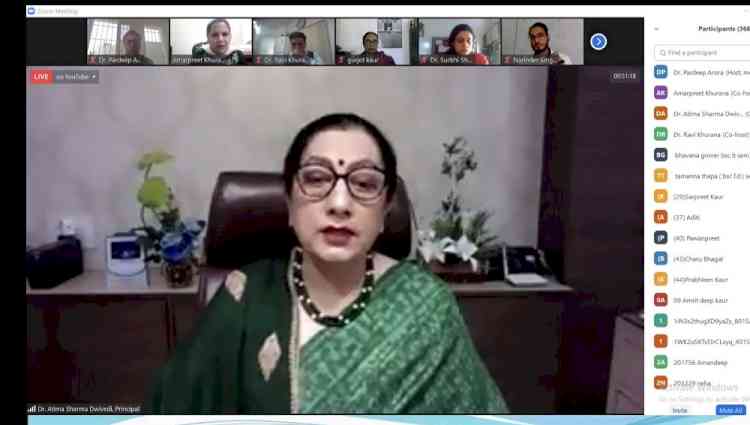 Jalandhar: Kanya Maha Vidyalaya becomes the first institution to introduce Gender Sensitization Program in its curriculum as a Value Added Program for the undergraduate students of Semester III. In the online inaugural function of Gender Sensitization Program, Principal Prof. Dr. Atima Sharma Dwivedi addressing the students and faculty members on the topic of Gender Concerns in Leadership. She averred that this program aims  to  transform  the  attitudes, behaviours and beliefs of students positively towards gender roles, responsibilities and relations. KMV focuses overall growth of students and gender sensitization is most important for successful women. She further maintained that under autonomy, KMV has introduced various reforms in education and KMV is the only institute in the region to introduce value added programs in each semester of undergraduate classes, and this program is one of its kind that KMV have introduced in order to generate a sense of gender equity in the minds of the students. She reiterated that KMV is always committed to empower and enlighten young women and is continuously  making efforts to generate awareness on various issues in the society. Prof. Atima Sharma Dwivedi who is deeply committed for the upliftment of the marginalized women and communities in the society initiated the inaugural talk of the program by considering gender sensitization a human issue & shed light on various societal issues like lack of equal opportunities, unequal wages,  patriarchy, physical and psychological violence. Prof. Dwivedi averred that under the gender sensitization program, KMV has planned a series of events including self defence workshop and a series of talks and lectures by the experts on diverse topics such as Cultural roles and gender sensitivity, Gender dimensions in economic participation and wage gap, Social issues and problems: Gender perspective with focus on Indian society, Gender and Political participation, Gender issues and Health care, Gender Rights: Constitutional rights and Legal rights. She also emphasised that both men and women should work together for gender equality.

Prof. Dwivedi inspired the students to believe in themselves in order to achieve greater heights and should never consider themselves inferior to anyone in the world. Madam Principal lauded the efforts of Mrs. Amarpreet Khurana, Coordinator, Women Studies Centre for successfully implementing the program.

Workshop on hair analysis and texturing