Kangra administration has succeeded in keeping the number of Covid-19 cases under control: CM 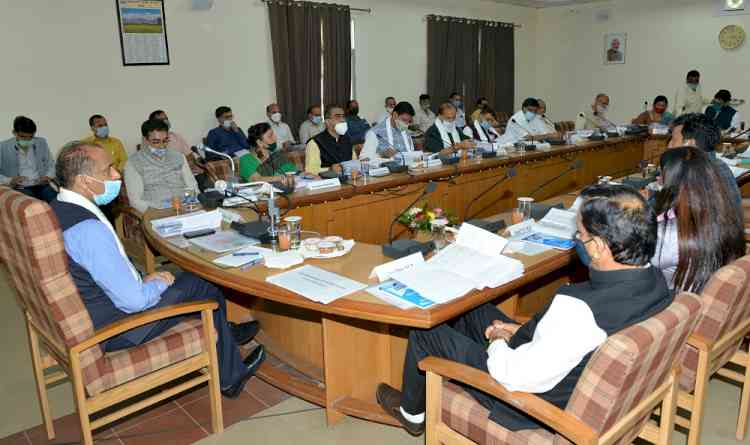 Dharamshala: Chief Minister said that although the Covid-19 pandemic has affected the pace of development in the State, but now the Government was striving hard to meet out the deadlines of various developmental projects.

Chief Minister said that although Kangra was the biggest district of the State, the district administration has succeeded in keeping the number of Covid-19 cases under control, thus special focus must be laid on social distancing and use of face masks. He said that all types of social gatherings must also be avoided. He said that people must be motivated to avoid social, cultural and religious gathering of more than fifty people.

He said that the Centre was also providing all possible help to the State Government to cope up with this hard time due to the Covid pandemic. Efforts must be made to remove the social stigma associated with coronavirus amongst the general public. The elected representatives have a major role to play in this regard.

Speaker Vidhan Sabha Vipin Singh Parmar said that even in this Covid pandemic Chief Minister has visited the district to review the developmental works in the district, which shows the concern of the State Government towards development of the district.

While presiding over the meeting of Ministers, MP, MLAs and district level officers of Kangra district at Dharamshala on Thursday, Chief Minister Jai Ram Thakur directed the officers to ensure time bound completion of all the developmental projects so as to check price escalation, besides ensuring that people could harp the benefits of development.

The Chief Minister said, “special focus must be laid on implementation of Chief Minister’s announcements. Various departments must ensure that all the announcements are implemented within the stipulated time period.” He also urged the concerned MLAs to ensure proper follow up, so that the announcements were implemented at the earliest. He said that Kangra being the biggest district of the State, the Government was laying special stress on development of this district.

Jai Ram Thakur said, “Vacant posts of doctors and paramedics would be filled up at the earliest in the Health Institutions in the district.  Efforts would also be made to provide specialist doctors in all the major hospitals of the district. Kangra district has a sizeable number of Ayushmaan Bharat and HimCare beneficiaries.”

The Chief Minister said that work on all new roads and bridges announced by him should be taken in hand on priority so that they could be completed at the earliest. He said that projects under PMGSY, NABARD, CRF etc should be taken up on priority. He said that stress should be laid on time bound completion of MLA priorities.  He also stressed on the need for expeditious clearances of various cases of FRA and FCAs, so that work on various road projects does not suffer due to want of forest clearances. He said that topmost priority must be given to those projects which were nearing completion, so that they could be completed at the earliest.

Jai Ram Thakur said that various Irrigation and Drinking water projects under Jal Jeevan Mission, BRICs etc. being implemented in the district need to be expedited. He said that DPRs of various projects must be prepared and proper follow up should be ensured so that they can be taken in hand at the earliest. He said that wherever required he would take up the matter with the concerned Union Ministries for arrangement of additional funds or other related issues.

The Chief Minister said , “ The State Government has constituted a Cabinet Sub Committee for finding out unspent money under different projects. mechanism would be evolved to divert the amount with the consent of the local representatives.”
He said that the developmental commitments of the State government must be given top priority. He said that the officers must ensure that the government would not tolerate any laxity in implementation of developmental projects.

Heavy to very heavy rainfall on July 20-21 in Himachal